New equipment helps combat the spread of COVID-19 on campus 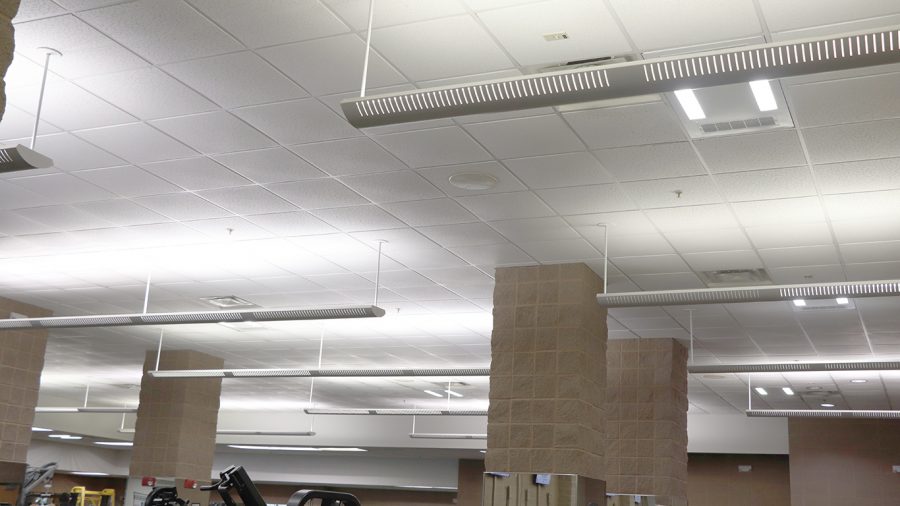 The troffer systems take the form of a drop-in light fixture. These have been installed in the exercise room in the REC. This area is considered higher risk for COVID-19 due to traffic flow and constant heavy breathing in the area.

While social distancing guidelines and mandatory face coverings are still seen throughout campus, they are not the only ways the university is fighting the spread of COVID-19.

Several new technologies have been installed in buildings around campus to prevent further spread of COVID-19 in the case of an outbreak or possible contamination.

Jeremy Brignac, director of the Environmental Health and Safety Office, described where each of the technologies will be installed.

The troffer system combines the UV sterilization technology with a carbon filter and is installed as a light fixture. The system is more effective for areas that receive more traffic but less surface contamination. Brignac explained how the troffer systems work and why they were added to The REC.

“The troffer is a combination of technologies,” mentioned Brignac. “It has a three-phase filtering system. The first piece of it is a carbon filter, so basically, it goes through an activated carbon filter and takes out any kind of smells, volatile compounds, chemicals. Then it goes through a UV sterilization tray that’s part of the system. The reason those are being put there is obviously it’s a higher risk area, with people breathing heavily.”

Brignac listed other areas on campus where the troffer systems will be installed.

“All the areas where they’re high-use and capable of putting them in, we’re putting the troffer systems in,” said Brignac. “Pennington has them in the main exercise room, and then in the locker rooms. The other ones of those are going in the math lab in the library. Because of its usage, we have to put a higher number of people in there, and that room is isolated off from the rest of the library, and then the lobby in Garrett.”

All of these technologies are working to accomplish the same result, which is to hinder the amount of damage the virus can cause. Brignac explained the different ways each system works to achieve this goal.

“The UV-C spectrum of light goes in and actually does genetic damage to the DNA of the virus itself, causing it to deactivate,” explained Brignac. “The other two technologies use a similar concept, but rather than the UV-C going in and actually destroying the DNA, what happens is those combine and attach to the viral particles and break down the cellular structure of it. It’s a slightly different technique, but what they do is the same end result. The virus is still there, but it can’t do anything. It becomes a shell of a virus that is no different than a piece of dust.”

Residence halls are also receiving vapor hydrogen peroxide systems due to the higher risk of surface contamination in those areas.

“Vapor hydrogen peroxide is going into all of the residential areas,” shared Brignac. “It does kill what’s in the air, but it also gives you something that affects surfaces, which is what you want in an area where people are living because that’s where you’re more likely to get surface contamination.”

In the event of a possible contamination on campus, Brignac described the portable UV-C systems that can treat an area that was contaminated by someone who contracted COVID-19.

“If we have a situation where someone is symptomatically exposing something and they somehow or another get here, in those cases obviously we’re gonna send them home, but now they’ve potentially contaminated that office or classroom,” said Brignac. “In those situations, we want to be able to treat it very quickly, so I have some portable UV-C generators that allow me to treat a room in 15 to 30 minutes and clear everything out immediately.”

According to the Building Sanitation Solutions page of the university website, the use of the troffer and vapor hydrogen peroxide systems would not cause any potential health risks except for during maintenance, and even then, the risk would be minimal.

“Both the Troffer and VHP systems have the bulbs as an integral part of the system and do not present a potential UV-C exposure during use,” states the website. “The only exposure potential is after maintenance and/or repair when the system may have to be switched on to verify the repair while unshielded. This would not be more than a few seconds which is well below the duration (>2 hours) that could generate a hazardous exposure.”