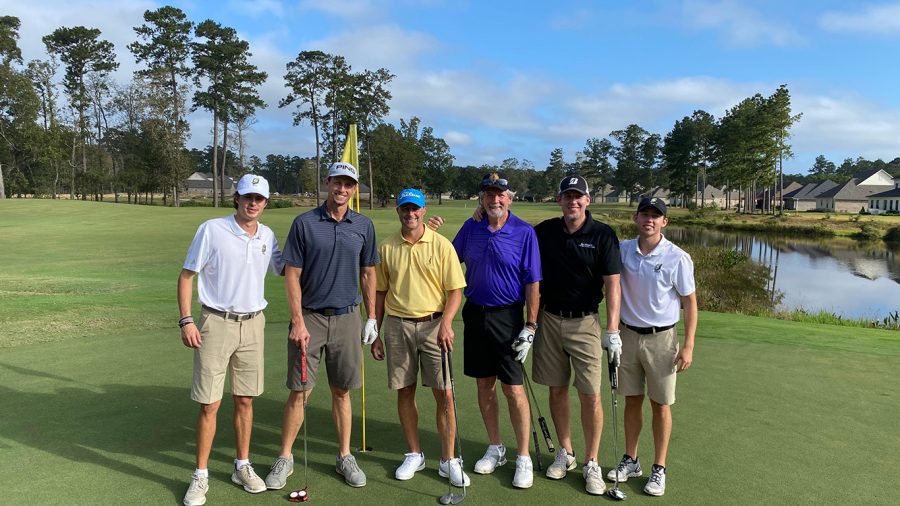 Participants in the Fightin’ Lions Golf Shamble pose at the Carter Plantation Golf Course in Springfield, La. The event raised over $11,000 for the university golf team.

The 29th annual Fightin’ Lions Golf Shamble was held at the Carter Plantation Golf Course in Springfield, raising over $11,000 for the university golf team.

Alongside the Lion Athletics Association, the university’s men’s golf program co-hosted the event on Oct. 23, beginning with an 8:30 a.m. shotgun start. Proceeds raised go toward the program’s Green Jacket Club.

Jake Narro, head golf coach, provided details about the Green Jacket Club for those who might be unfamiliar with it.

“The ‘green jacket’ comes from the Masters Golf Tournament held in Augusta, Ga. every year,” explained Narro. “You get a green jacket if you win it, so that is where the name comes from.”

The event’s main goal is to provide support for the men’s golf team, according to Narro.

“It’s a way to support the golf team from the community and the families of the players,” said Narro. “That’s our mission and our goal.”

As a whole, Narro agreed and emphasized that the Fightin’ Lions Golf Shamble adds value to the men’s golf program.

“We have the ex-president of the university there, Randy Moffett,” said Narro. “We also have ex-players there to mingle with the current players and talk about the good old days and the new days. It is a wonderful way to have interaction with the community.”

Narro detailed how he hopes his team will benefit from the experience.

Mary Hannah Johnson, director of athletic advancement for LAA, gave insight as to how the Fightin’ Lions Golf Shamble was coordinated behind the scenes.

“That entails the communication, the flyers, social media, running transactions and processing them, getting all of the teams together since it is a four man scramble,” explained Johnson. “We also make sure every team has four people on it if someone signs up individually.”

Johnson shared that football and golf alumni are often among those who sign up to participate in the event.

“It’s been fun to connect with those people every time they come,” expressed Johnson. “Overall, it’s a really fun atmosphere. They have breakfast and lunch, so they all get fed. It is a good time to cater to those people that donate to us.”

Being able to connect with the community is one of the most important values of the event, according to Johnson.

“The biggest reason is because the golf team is actually there, and they get to connect with our community,” said Johnson. “It does add overall value because the community actually gets to know our student athletes personally, which always helps when it comes to support.”

In the midst of a turbulent year, Johnson emphasized that raising proceeds is even more important than it has been in the past.

“In the year 2020, it’s more valuable than it ever has been in the past,” reflected Johnson. “It has been valuable in the past, but this year we have to pay for COVID-19 testing, and we’ve had to pay for certain expenses we’ve never had to before.”