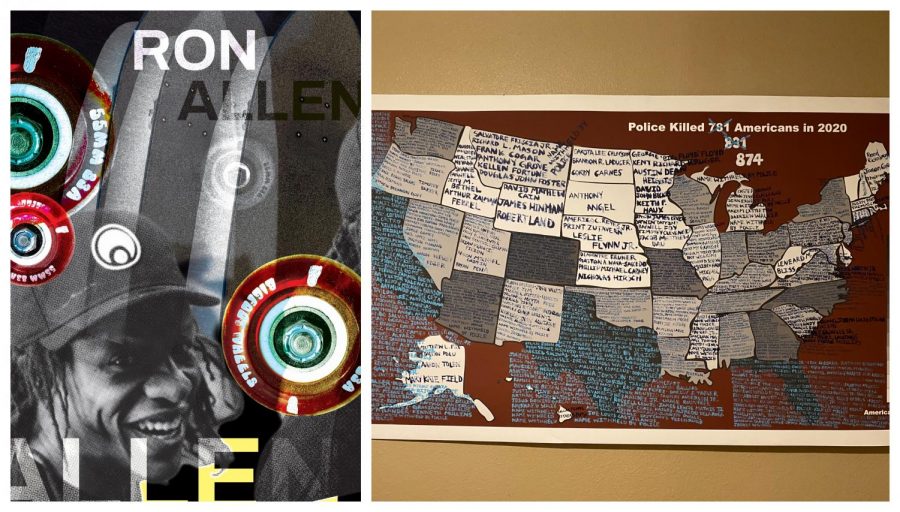 Left, senior art major Dejiona Jackson’s work features African American skateboarders such as Ron Allen and Ray Barbee. Jackson. Right, senior art major Aubree Barber spent “hundreds of hours” on a map displaying police brutality deaths. With a focus in graphic design, she is one artist in the senior exhibit that will feature artwork centered around issues she is passionate about.

The work of senior art majors will soon be displayed as they prepare for the opening of 2020’s final senior art exhibit.

The exhibit will be on display from Thursday, Nov. 5 to Wednesday, Nov. 25 in the Contemporary Art Gallery. Seniors will present work they have developed throughout their undergraduate careers.

CAG Director Cristina Molina opened up about the combined effort from her and students that is required to create a seemingly effortless viewer experience.

“Organizing and curating exhibitions takes a lot of consideration overall, from designing promotional materials such as flyers, posters and social media to physically preparing the gallery space and hanging the artwork with care and intention so that it all looks seamless,” explained Molina. “Not to mention, wrangling over a dozen young artists and making sure that their work is prepared and submitted in a timely manner.”

Senior art major Dejiona Jackson will display her artwork during the exhibit. According to Jackson, Hurricane Zeta delayed some of the set-up process.

“Trying to finish up the last few ends now so I can start printing this weekend,” noted Jackson. “We have to submit everything Monday. They don’t have to be hung up Monday, but everything has to be submitted to the gallery so they know what is going up.”

Senior art major Aubree Barber has spent over a year and a half on one artwork and more than 60 hours on others.

“My painting book, I probably worked a whole year and a half on it,” described Barber. “My posters, I put in 60 hours total for them, and the U.S. map, I had to do a lot of research with that, so consecutively each day since Sept. 2, so I’d probably say hundreds of hours.”

After the exhibition goes up, Molina explained that there is still work to be done on the exhibit.

“Once the exhibition is up, it’s also important that people come see the show, so that is another level of responsibility, continuing to engage audiences through various programming, such as gallery walk throughs and artist talks,” explained Molina.

According to Molina, senior exhibitions allow students to practice displaying their work professionally and amplify their opinions on issues they find important.

“Many of the students are touching on a variety of important topics, such as social commentary related to the pandemic, cycles of life, issues of identity and so forth,” said Molina. “Our senior exhibitions give graduating students a platform for visually articulating the issues they feel passionate about.”

Barber opened up about the work she plans on displaying during her last feature in the gallery. Among her display will be one particular work of art that is dedicated to police brutality victims.

“I’ve been researching all of the people who have unfortunately passed away because of the police, and I wrote all of their names down where they passed away at, and there’s a giant U.S. map that I feel is very jarring,” explained Barber.

The overall theme of Jackson’s work will revolve around the underrepresentation of African American skateboarders. Part of her inspiration came from her own interest in skateboarding.

“I’m centering it around African-American people so they have some representation,” described Jackson. “I’m making a book, and my actual exhibit is going to be mainly promotional flyers and banner-styled things. I used to skate a lot, and I picked it up again this semester, and I just wanted to do something that I was heavily interested in.”

Molina believes the amount of effort put into the exhibit is immeasurable.

“The work is difficult to quantify,” said Molina. “It takes a lot of collaborative effort over time. Students have been working on these projects for at least a year, and as I mentioned there is much planning and coordinating that needs to happen as the show comes together.”

The Contemporary Art Gallery is located next to Clark Hall on the east side of Strawberry Stadium.