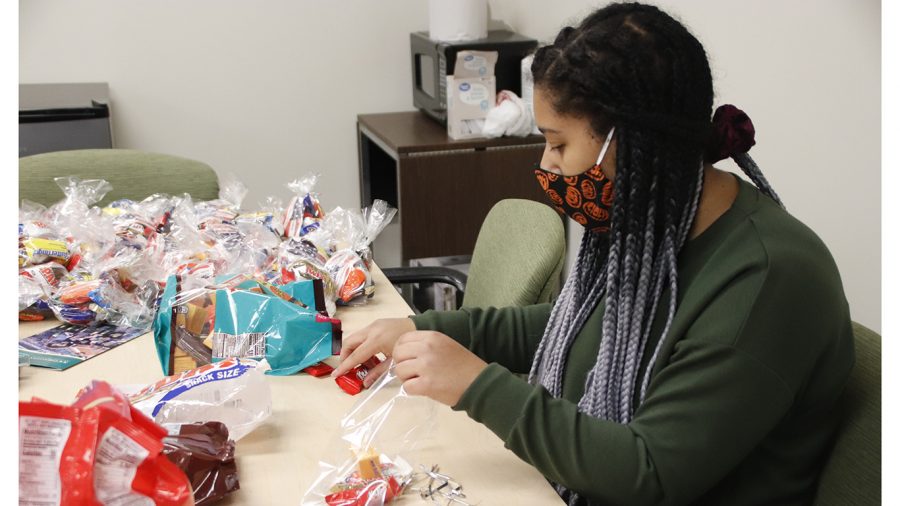 Student worker Frannie Reyes, junior psychology and criminal justice major, prepares goodie bags in the Office of Military & Veteran Success. The office will have a table set up near the Student Union on Wednesday, Nov. 11 from 11 a.m.-3:30 p.m. to commemorate Veterans Day and hand out the goodie bags.

Faculty and students at the university who have served or are currently serving opened up about their military duties and experiences.

Matthew Watkins, director for the Office of Military & Veteran Success, is an Air Force veteran who served in Signals Intelligence under the National Security Agency for five years.

Following the 9/11 attacks, Watkins felt a calling to join the military.

“I woke up one morning, saw those towers hit, and after seeing that, I kind of felt the call for service, and I decided to join shortly after that,” described Watkins.

Watkins was stationed at Fort Meade, Md., where he was tasked with the collecting and reporting of foreign communications, among other assignments, for the National Security Agency.

“We collected information signals and reported that information in support of the mission, and we also had assignments,” said Watkins. “I worked on computers, GPS tracking, collected communications and signals and recorded those, so it was a fun job. Also did a little bit of Morse code as well.”

Academic Coach Brad Bergeron is a veteran of the National Guard who was called to action during the time of the 9/11 attacks. He was deployed to Kandahar, Afghanistan as part of Operation Enduring Freedom.

“We got there pretty much early on, when the U.S. took over Kandahar’s airport,” described Bergeron. “It was basically a bunch of dunes, sand everywhere around the airport, and we had to make roads, we had to build fire pits, we had to build bunkers, we had to sweep for landmines and other explosive devices and make sure that the inside area was safe, and the nearby outside area of the base was safe as well.”

Bergeron was affected by the absence of his loved ones.

“I was married at the time,” said Bergeron. “And the hard thing would be when you do get in touch with your loved ones back home, is when they’re suffering with things, there’s nothing you can do to help them because you’re overseas.”

James Dyess, student and LDVA Vet Corp Navigator at the university, was deployed in the Coast Guard. For four years, he served on the vessel Alex Haley in Kodiak, Ala. for more than 250 days out of a year.

Dyess described his experience as a Seaman.

“I specialized as a Boarding Team Member and spent most of my time jumping on moving vessels in the Bering Sea,” explained Dyess. “I explain to most people that my experience with the coast guard was the best and worst time of my life. There were mostly low moments, but it made the fun moments all the more meaningful.”

After two tours sailing the Arctic Ocean, Dyess’ perspective on the world was enhanced.

“It certainly opened my eyes to just how magnificent Planet Earth can be,” said Dyess.

Active Coast Guard member and Officer Strength Manager Candace Angeron is also humbled by the experiences she has had in the military thus far.

“I get to command soldiers, so that humbles me, and I’ve learned so much from them,” said Angeron. “As an officer, we’re told to lead, but you also learn that just because you’re an officer, you don’t know everything. We’re always learning things from our NCOs and from our soldiers and then working to help them to better their lives – that actually helps me to better mine.”

Bergeron spoke about the impact of thanking veterans for their service.

“I think most veterans, we get a little embarrassed a little bit when people thank us,” explained Bergeron. “We did it for our own reasons, but it really does mean the world to us, when people do stop and tell us that they’re thankful for our service, because I think what some people don’t realize, is the sacrifice of being away from family and doing things that a lot of people necessarily don’t want to do. It just certainly is nice when people appreciate it and tell us thank you.”