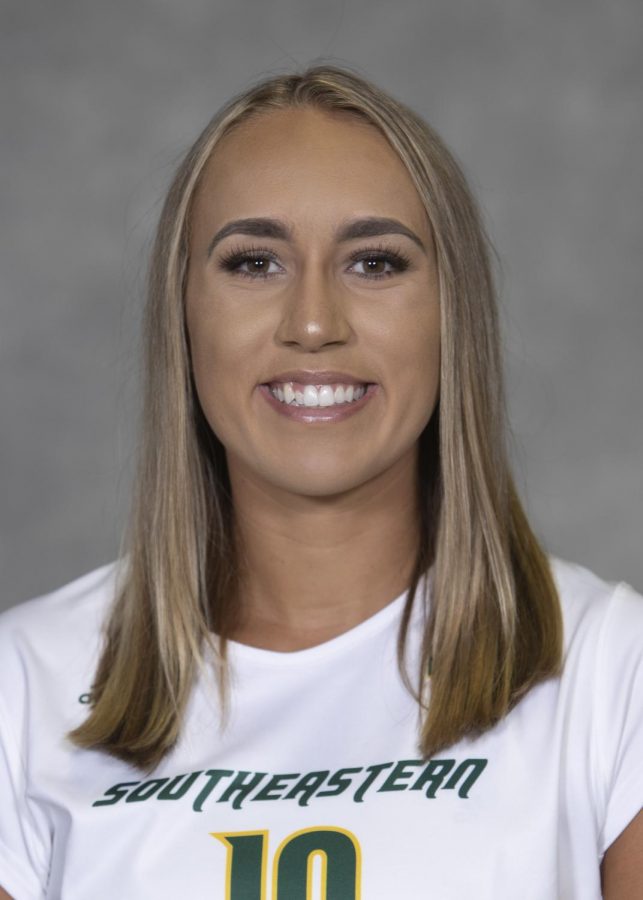 Senior middle backer Sam Gomez is preparing to play her final season with the women’s volleyball team in spring of 2021.

Gomez began playing for the university during her freshman year in 2017. Over the course of her collegiate career, she has posted a total of 685 points, 535 kills, 26 assists and 12 aces.

Gomez shared that she has enjoyed playing on the team over the last three years. She feels that the team has overcome a lot since her freshman year, and she now feels like she is a part of something bigger than herself.

“The first year is always scary, not knowing if you will fit in, and believe me I didn’t, but I grew and the team evolved in a sense and it started to become better,” explained Gomez. “The team dynamic shifted intensely when Coach Jeremy took over the program, and I can say it was for the better. The team culture grew. Many adapted to it and we turned the team around in a season.”

Gomez started playing volleyball in the third grade after her teacher suggested it to her.

“The coach said I could come to watch a practice and from there I wanted to play after watching just a few short hours,” shared Gomez. “I didn’t start really getting into it until I was in sixth grade when I got onto my first travel team with Michelle Anderson as the owner of the club. From there my skills developed and I grew as a player and made many volleyball connections across the state with other players and coaches.”

“Like all families, we have little disagreements here and there, but we know we are all here to do one thing and to keep a good image of the university not only on the court but by how we support other aspects of the school as well,” expressed Gomez. “Some girls call me for advice because I am seen as the mom on the team, while other players have different roles.”

“Sam has been a really enjoyable kid to coach,” said White. “She’s got a corky personality that makes it easy to keep things light-hearted and fun in practice,  and she’s a phenomenal competitor come game time. I’m very excited to see how and where she leads us this spring.”

White shared that Gomez brings energy to the team and that she is a great role model for work ethic for the younger players, both on and off the court.

White also believes that Gomez has improved tremendously since first joining the team as a freshman.

“I remember our first practice when she was struggling with the timing for our main middle set and being a little too worried about being perfect,” shared White. “Now, she’s leading us in just about every offensive category, coaching up our younger middles, and bringing constant energy and competitiveness to practice and games. She’s an amazing young woman and I feel blessed to be able to coach her.”

The women’s volleyball season is scheduled to begin on Feb. 4 in Lake Charles against McNeese State University.