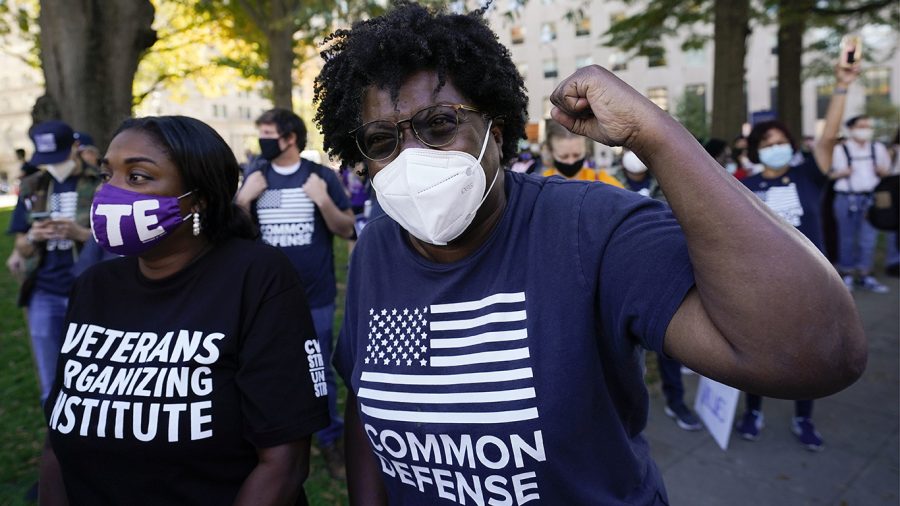 After several delays in the ballot-counting process for many critical swing states, Joe Biden was declared the winner of the 2020 Presidential Election.

On Nov. 7, three days after election night, the Associated Press projected that former Vice President Joe Biden had won the Presidential Election after they placed the state of Pennsylvania in his column. Biden has become the first presidential nominee since Bill Clinton in 1992 to defeat an incumbent president.

Despite multiple networks calling the election, Incumbent President Donald Trump has refused to concede the election, claiming that his campaign has collected evidence of widespread voter fraud and has filed lawsuits in several states including Nevada, Arizona, Georgia, Pennsylvania and Michigan.

Catherine Spanogianni, a senior management major, was very excited to see that Joe Biden had won. Spanogianni believes that the election has been settled and President Trump’s lawsuits are unnecessary.

“Trump has previously lost legal battles regarding the same matter before election day took place so it is assumed that he won’t win these ones either,” said Spanogianni. “Biden won and not calling it until months later when the lawsuits are settled only further divides the country.”

Regarding President Trump’s refusal to concede the election, Spanogianni feels that it is inappropriate.

“Trump should concede because Biden won fair and square,” shared Spanogianni. “He expected Hillary to do the same in 2016, so he should be doing the same now.”

Alyssa Guillory, a senior accounting major, was surprised that President Trump did not win a second term.

“I was honestly pretty shocked,” said Guillory. “I truly thought Trump would win in a landslide. Call it optimism. Another part of me is not surprised with everything the media has pushed this year to paint Trump in a terrible light. Also, I’m not surprised they won by cheating.”

Guillory believes that the media called the election for Biden too early and should have waited until allegations of fraud were fully investigated.

“They 100% should have waited,” shared Guillory. “If the roles were reversed, there would be an uproar from liberals until it was fixed. But since they won, they see no point in doing due diligence to win fairly.”

Additionally, Guillory does not believe that President Trump should concede at this point.

“I think the truth is the truth, no matter what the media says,” said Guillory. “And until that truth is proven, Trump should fight for it. The liberals want him to give up, push him into a corner. But as a businessman, Trump has fought his way out of many predicaments similar to this, and as President, he has fought the media since day one. He won’t back down. And he definitely shouldn’t back down.”