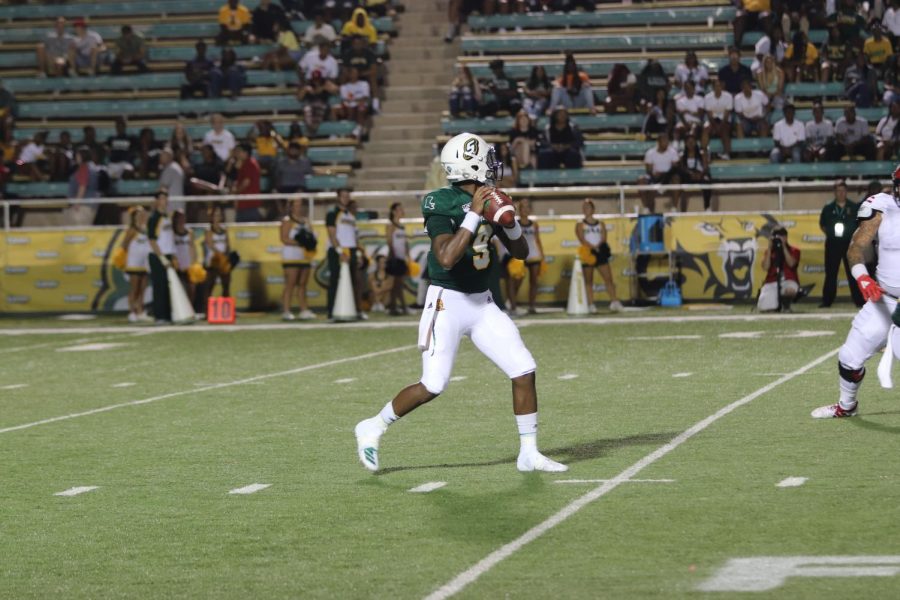 The 2019 alumnus Chason Virgil passed for a total of 3,791 yards and 25 touchdowns for the Lions in his senior season. Virgil, a native of Mesquite, Texas returned to his home state to coach and teach at North Crowley High School in Fort Worth, Texas. Virgil one day hopes to become a head coach at the high school level.

After finishing his collegiate career in the Lions’ record books, 2019 alumnus Chason Virgil decided to try his hand at coaching football in the state of Texas.

Virgil, a native of Mesquite, Texas, transferred to the university after playing two seasons at California State University, Fresno.

Virgil identified how coaching high school football teams has been a part of his career plan for as long as he can remember.

“I always knew that coaching was one thing I wanted to do,” explained Virgil. “I always loved the idea of trying to teach younger athletes the game of football and watching them grow as an athlete.”

The former Lions quarterback shared how he found out about the coaching position at North Crowley High School in Fort Worth, Texas.

“A former coach of mine knew the head coach at North Crowley and reached out to him for me,” said Virgil. “He shared with Coach Allen the things I had to offer, and I was offered the position.”

Virgil coaches two of North Crowley’s football teams, serving as the offensive coordinator for the freshman team and the varsity team’s quarterbacks coach.

“I think my time at Southeastern really helped me out a lot in the current job role that I have,” reflected Virgil. “What the coaches taught me while I was there was very useful and is the same advice I am giving our players now.”

The 2019 alumnus explained how he hopes to continue to progress up the coaching ladder in his career.

Besides trying to win state titles and coaching high school games, Virgil explained what his ultimate goal is.

“You want to be a great leader and impact the youth in a positive way, really,” said Virgil. “Sometimes coaches’ biggest impacts are away from the x’s and o’s of the game and in their life. I want to offer kids and teenagers the guidance that they might not have at home.”

Along with being a coach, Virgil also teaches world geography at North Crowley High School.

“Like I said, I love to teach, even if it’s off the football field,” commented Virgil. “I love teaching world geography to the kids.”

The North Crowley Panthers will look to improve their 2020 record to 4-3 on Friday, Nov. 20 at home against Chisholm Trail High School.