Capitol storming is a symptom of a larger problem 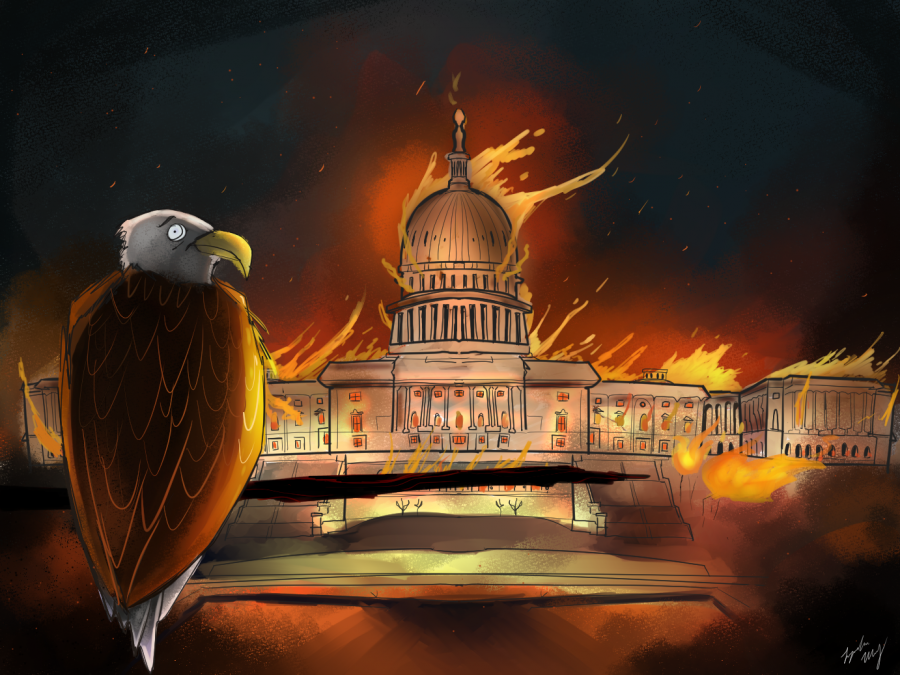 There are really no words to describe what we saw take place on Jan. 6 at the U.S. capital. What started as a protest headlined by President Trump against alleged voter fraud in the 2020 election, devolved into an assault on the Capitol building.

Given the fact that Trump had still not conceded and several Republican lawmakers threatened to object to the electoral college certification, I knew that Jan. 6 would be crazy. I never saw anything like this coming.

Rioters broke through police barriers to gain access to the interior of the Capitol, causing the joint session of Congress to be interrupted. They assaulted police officers and destroyed property. They also gained access into the House Chamber, Senate floor and several congressional offices. In the chaos, four civilians and one police officer were killed, as reported by multiple sources.

Political violence and intimidation accomplish nothing. It will never lead to anything except more violence.

What happened was inexcusable, but we must take time to reflect as a nation why people were so disillusioned with their government that they chose to invade their own capital. We have a right to be angry about what we saw, but we cannot afford to continue to promote this cycle of political violence.

The chaos we saw did not come out of nowhere. These political tensions have been brewing under the surface for decades. We have seen them reach a boiling point over the past few months.

It has become clear that there is deep discontent within our country. Most Americans believe that our system is broken and that their leaders are not listening to them. People have become so angry, so convinced that our system is beyond saving that they allowed their passions to get the best of them.

It is very hard not to feel discontent or feel as if we have no control. We have witnessed our culture change radically over the past few years. The America of today is virtually unrecognizable from the one most people grew up in. This radical change has made people desperate for stability. This desperation is the reason Trump was elected to office in the first place.

Americans have every right to believe that President Trump’s actions in the aftermath of the election were wrong. However, it would be foolish to use this incident as justification to silence and punish people who voted for Trump. Actions such as the banning of the President from social media do nothing but make people more angry and tribalistic.

There has certainly been a ton of misinformation circulating online in the aftermath of the election. Suggestions by online groups such as QAnon that Trump had a hidden plan to expose massive voter fraud were instrumental in convincing these people that things were a lot worse than they seemed.

What we saw is not representative of the majority of people who voted for Trump in this election. Most of them are regular Americans who, like you and I, were horrified by what they saw.

We are now living in a country where a quarter of our population believes that our elections are rigged. These questions about election integrity have been met with contempt by our political leaders. Even if you believe that these claims have no merit, ignoring them will have profound consequences.

When people believe that their votes do not matter and their voices are not being heard, our democracy suffers. People who feel that they have no control act irrationally. If this trend continues, some people will develop the flawed perception that further violence is the only way to make their voices heard.

Regardless of who you voted for, we cannot point fingers and blame each other for what we saw. Let’s not become part of the problem by giving into inflammatory rhetoric. We also must avoid the temptation to view this incident through the lens of our own political biases.

Hopefully, this incident will be a wakeup call to all of us that our current political climate is unsustainable. We cannot convince ourselves that politics is an all or nothing battle. We must not remove people from our lives simply because they vote differently than we do.

The issues that face our country are important, but there is far more to life than politics. It is not healthy to center our lives around the person who is in the White House or which party controls Congress.

Despite what the rioters present at the Capitol on Jan. 6 believed, things are not as hopeless as they seem. The people that stormed the Capitol were convinced that our country was beyond saving, but America is never beyond saving. Things seem to be falling apart, but our country has triumphed over much more difficult challenges. Only together can we persevere through these times of uncertainty.