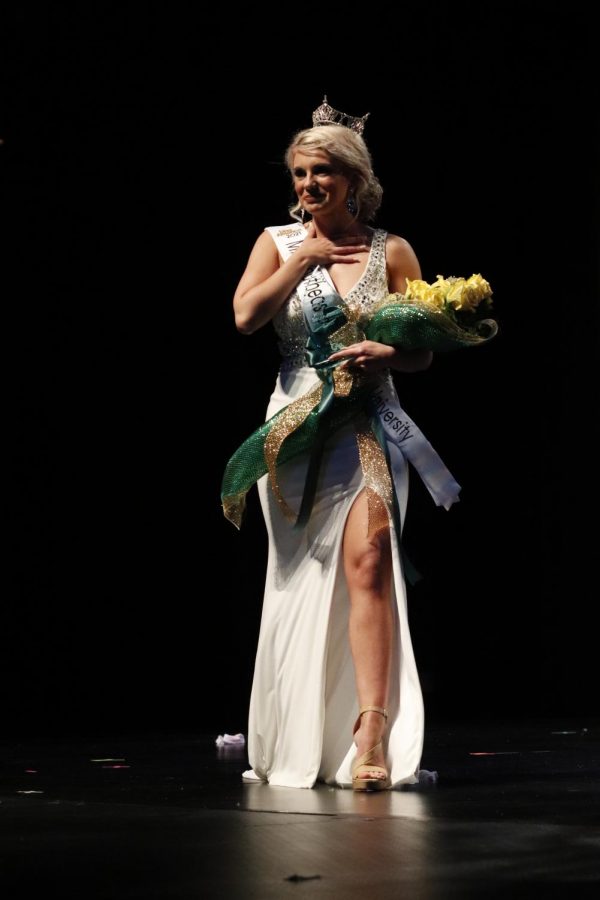 On Friday, Jan. 22, a new queen was crowned at the 60th annual Miss Southeastern Louisiana University pageant at the Columbia Theatre for the Performing Arts.

Lily Gayle, a senior communication major from Hammond, received the Miss Southeastern 2021 title out of the 15 contestants who participated in the scholarship competition. This year, the Campus Activities Board and other pageant organizers conducted a live-streamed, socially-distanced ceremony with a limited audience capacity.

Gayle described her emotion as starstruck when she heard her name called on stage. In the final moments before the crowning, she had not expected to be the recipient of the title.

“When I heard my name called, I think I went into heaven a little bit,” said Gayle. “To be Miss Southeastern, the 60th one, it just means so much and that I have some big shoes to fill because we have 60 years of a legacy here, and I want to make sure that I fill those shoes correctly.”

For health and safety reasons, the talent portion of the competition was prescheduled and prerecorded for the first time in the pageant’s history. Gayle performed vocally and played piano for her talent portion, which she believed significantly contributed to her success.

“I feel like my onstage question and answer and my talent helped out a ton,” she said. “I practiced so hard and so long on that talent and getting my dress all done and all that. I feel like those things and those qualities really helped me get the crown the way I did.”

Jordan Tate, a senior industrial technology major and Gayle’s significant other, attended the pageant to show his support.

“Whenever they were about to call Miss Southeastern, my heart was about to come out of my body because I play college football, and I’ve never seen somebody train so hard for something in my life, not even myself,” claimed Tate. “I couldn’t be more proud of her. She gave it everything she had. She earned it.”

Wooton described how she felt to be on the stage tonight after all the preparation she put into the competition.

“I just felt like everything I had been working towards was finally falling into place, and my voice was finally being heard,” she shared.

Janine Hatcher, Miss Southeastern 2020, passed on her title and crowned Gayle as the next reigning queen.

“I’ve had my time,” said Hatcher. “I’m still going to continue to do the work that I’ve done. I’m excited for the opportunity to compete at Miss Louisiana, so it just drives me to get prepared for the next step. I’m so happy for her. All the girls did an amazing job, so I’m happy.”

Gayle and Hatcher will both go on to compete in the Miss Louisiana 2021 pageant in June since the state competition was postponed last year. It will be the first time two Miss Southeastern titleholders have the opportunity to compete in the state pageant together.

“The main thing that I didn’t want to do was take away the opportunity for another woman to win scholarships, so the fact that we get to have another titleholder and another woman winning scholarships, especially in a time like this—it’s been so trying for people, financially especially—I couldn’t be more thrilled,” expressed Hatcher.

Gayle is in good spirits regarding competing next to Hatcher at the state pageant come summer.

“I feel wonderful,” she said. “We are sister queens now. This is a sisterhood. We are about camaraderie here in the Miss Louisiana and Miss America organization, and I feel that teamwork makes the dream work.”

Marjorie Parker, director of student engagement, took part in directing and organizing the competition this year.

“I think the pageant went really smooth, especially in the era of COVID and us having to record to minimize the people in attendance—we could only have 75 people in attendance,” explained Parker. “We really feel very proud about the pageant and how it turned out, and I think all of the contestants also enjoyed themselves on this journey.