Miss Southeastern 2021: Her journey from Baton Rouge to Peru to Hammond 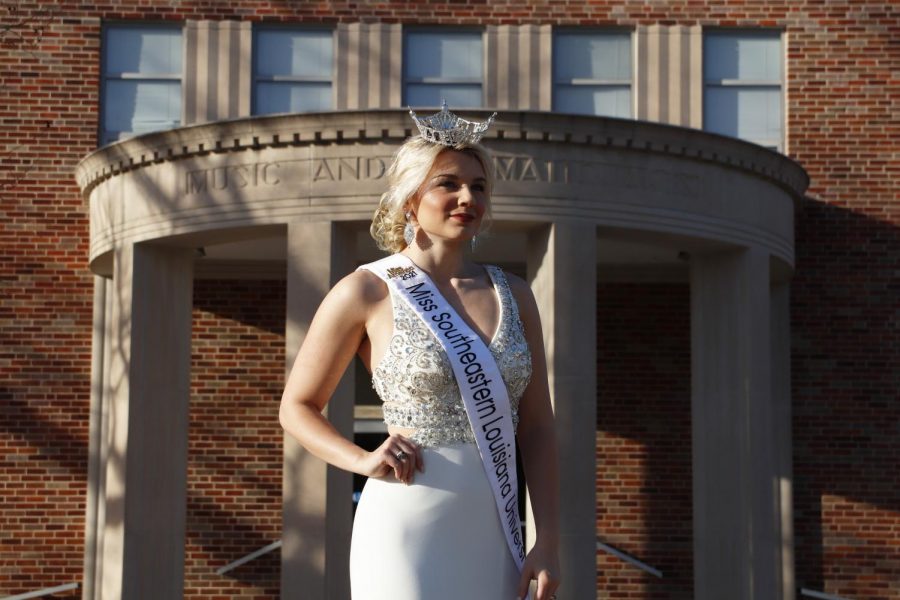 Miss SLU 2021 Lily Gayle will be competing in the Miss Louisiana pageant as Miss Green and Gold. Janine Hatcher will compete at the state pageant as Miss Southeastern 2020 since the competition was postponed last year.

On Jan. 22, Lily Gayle began her reign as the institution’s 60th Miss Southeastern Louisiana University. How did Miss SLU 2021 end up in the city of Hammond?

Gayle was originally planning to go to Louisiana State University, but her path changed after attending a preview day on Southeastern’s campus.

“I came here and I met Marjorie Parker at one of the Lion Pride Previews,” she said. “She’s the one who really changed my mind on coming here, and I absolutely fell in love with Hammond and downtown and coming here on campus. Everyone is such a family here, and I loved that.”

However, prior to college decision-making and before high school, Gayle experienced a unique childhood that had a significant impact on her teenage years and ultimately led her to Hammond.

As the oldest of four children, Gayle has two sisters and a brother. Her father runs a church in Denham Springs, and her mother homeschooled all of her siblings. She was born in Baton Rouge, but her family moved to Peru, South America for mission work when she was three years old and moved back to Louisiana when she was 13.

When she was a junior high and high school student, Gayle suffered from anxiety, situational depression and anorexia. She felt like an outsider to American life whenever her family moved back to the states.

“I didn’t know what it was like to be an American teen in the 2010s era. Coming back and realizing this culture is completely different — there’s a lot more social media and technology here — I didn’t know how to catch up. I went through that without a lot of support at all,” said Gayle.

Gayle’s experiences influenced her decision for her platform, the Lifter’s Project: Everyone’s Worth Their Heartbeat, which advocates for depression, anxiety and anorexia recovery. Since her earlier years at the university, weightlifting has been a source of positivity for Gayle.

She commented,“I’ve been weightlifting for about four years now, and it really made my body image become more positive. It made me feel more confident in that, to be beautiful, you don’t have to be skinny. You can be lifting 115 for five reps and still look good in a hot pink dress.”

Gayle and her boyfriend Jordan Tate, a senior industrial technology major, have known each other since high school. Tate recalls the time when she was introverted and nervous to talk to people on campus, but he mentioned how much she has grown over the years.

He said, “Miss Southeastern is the perfect position for her. This school helped her discover who she really is, so now she wants to give back to the school that she loves so dearly. She will fight for what is right, and she will do her best to make a difference in people’s lives.”

Gayle said she felt that her homeschooling set her apart, and she was more timid during her first semester, the fall of 2017. Once she began to grow more comfortable in her place at the university, Gayle jumped into campus involvement and became an orientation leader in 2018.

She is currently a leader for the on-campus chapter of the Fellowship of Christian Athletes, the campus director of outreach for the Student Government Association, and she is a full-time sports reporter for the Southeastern Channel. Gayle chose communication as her major because of her love for sports.

Gayle’s freshman year remedial math teacher had an impact on her transition from homeschool to college by being in her corner. Lizette Leader, Ph.D., Associate Provost of Academics and Connect to Success and as an adjunct instructor for Northshore Technical Community College, spoke on Gayle’s growth and potential.

“Watching Lily’s transition from a quiet homeschool student to a young, determined woman in control of her own world and about to complete her bachelor’s degree sends energy throughout the Lion Nation. Her service to the Green and Gold community in a variety of roles and her dedication to completing academic goals are testaments to our entire Green and Gold community,” Leader said.

Gayle summed up the legacy she wants to leave behind during her reign as Miss SLU, saying“I want everyone to know that I was one of the most relatable, down to earth people they’ve ever met. I want to make sure those people understand that if someone like them could be where I’m at now, they can do the exact same thing.”

The university is sending two titleholders, both Gayle and Miss SLU 2020 Janine Hatcher, to the Miss Louisiana pageant in June. Gayle will compete as “Miss Green and Gold” at the state competition.