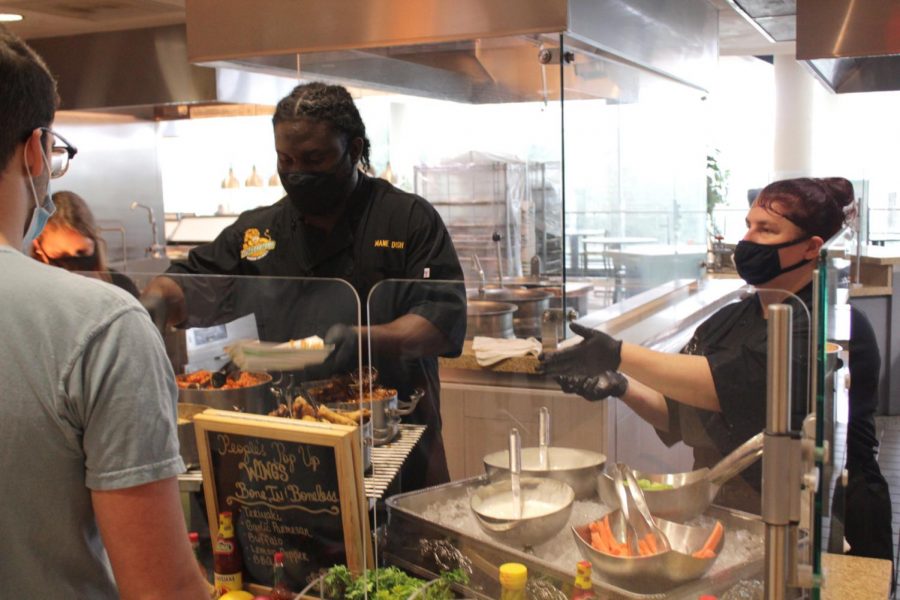 Dining Services has recently implemented a new food stand in the Mane Dish called The People’s Pop-Up. The pop-up serves food once a week voted on by students as an effort to give students the opportunity to tell the Mane Dish what they want.

The People’s Pop-Up operates as any other station, it is protected by plexiglass shields and the staff are all wearing the required personal protective equipment. The pop-up is located to the left of the pasta station.

Mason Garcia, executive chef and director of residential dining, explained where the idea of a new food stand came from.

“I’ve always enjoyed doing pop-up’s and the idea to involve students was just something I thought would be a cool way to build some excitement and give our guests the opportunity to tell us what they want,” said Garcia.

The People’s Pop-Up can be whatever students want it to be: sweet, savory, entrée, appetizers, desserts, drinks, according to Garcia. While the pop-up is live, Dining Services posts a poll on their Instagram with options for next week and the option voted the most popular is selected.

Before the polls are posted to Instagram, however, Garcia and other Mane Dish employees decide on three options.

Garcia said, “We have a white board in our kitchen office on which our employees are encouraged to write their ideas. Each week we decide on the three options we’d like to offer for a vote.”

He said he believes that these events have been extremely successful and has brought more traffic to the Mane Dish.

“We’ve had a lot of participation in the polls and feedback has been overwhelmingly positive. It’s hard to gauge success in the COVID era by participation, as there just aren’t quite as many people on campus, but we have noticed a slight increase on People’s Pop-Up days,” noted Garcia.

Last week’s featured dish was buffalo wings, with people being able to choose between various types of wings and dipping sauces along with sides such as veggies and fries.

Skylar Stiglet, junior computer science major, had been enjoying the recent dishes by The People’s Pop-Up food stand, with last week’s dish being his favorite so far.

“I was surprised by the many different options they had and the workers were very kind and I can’t wait to see what they will serve next,” commented Stiglet.

Students can vote on next week’s poll by following the Southeastern Dining Services account on Instagram @southeasterndining.