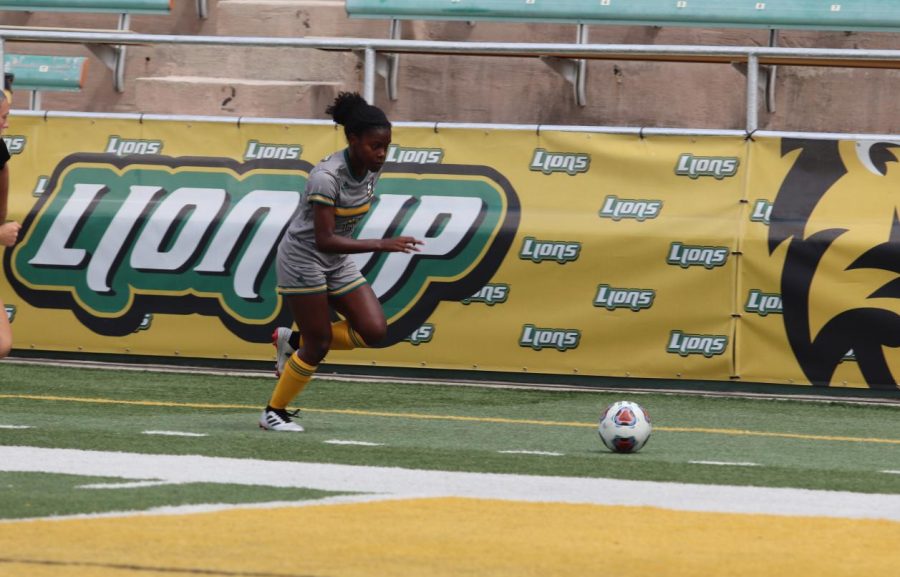 The Lady Lion women’s soccer team will play a conference-only schedule in 2021.

It has been nearly two years since the university women’s soccer team has had a competitive conference game, and the team is ready to play, according to senior midfielder and Captain Megan Gordon.

With COVID-19 playing a huge factor in their performance, Gordon explained what the team has done to mitigate the risk of catching the virus.

“To start with, we’ve done a lot where we space each other out, so we’re still six feet apart during drills and stuff. Now that we’re in each other’s bubbles, we get tested each week. We’re training like normal. We train five days a week—actually pre-season, we’ve done six days a week—with one day off,” Gordon explained.

Going into the new season, Gordon explained that she has worked on integrating the team.

“There’s been a lot of, obviously, issues over the past year so just making sure everyone’s okay regularly and checking in on everyone. I think because of 2019 and COVID, life has been spent with each other because, obviously, it’s been a lot different for us, but as athletes, we were lucky enough to train throughout the fall, so having that has been huge. We’ve just gotten stronger and stronger as a team,” she said.

Gordon shared her thoughts on the team’s improvements and differences compared to last year.

“I think we have a lot more depth. I think now we have girls fighting for different positions, so it gives a sense of competition, so you’re never safe and that, if something goes wrong, we can always bring in someone and all of that,” shared Gordon.

The team has some activities that they use to bond. Although they could not do some of the things that they planned to.

Head Coach Christopher McBride explained some ways that the soccer team has grown closer as a team.

“We’ve had some sessions where we get in, and we go over some games like ‘Who Am I?’ games. We fill out a sheet in the beginning of the year and everyone says a funny story about their childhood or something, and then we get in and we read it out and have to guess who it is and they get points for guessing who it is, so we do a lot of fun games,” explained McBride.

McBride shared that the team is most anticipating Nicholls State University, but the team treats everyone in the conference as a rival.

There are some specific strategies that they use for each team, but they prepare themselves more for a player as opposed to a whole school.

“There’s some specific players that will cause different strategies. As a team, we have our own identity. We want to make sure that teams can adjust to us rather than us adjusting to them, but there’s certain players that we play against that we have to make adjustments for because if we don’t, then they’ll be dangerous,” expressed McBride.

The Lady Lions women’s soccer team will open their 2021 season on the road this Friday in Beaumont, Texas against Lamar University.

After having a disappointing 2019 season and finishing 4-13-1 the Lady Lions will look to improve in 2021. Southeastern will play a conference only schedule with 11 matches total and 6 at Strawberry Stadium