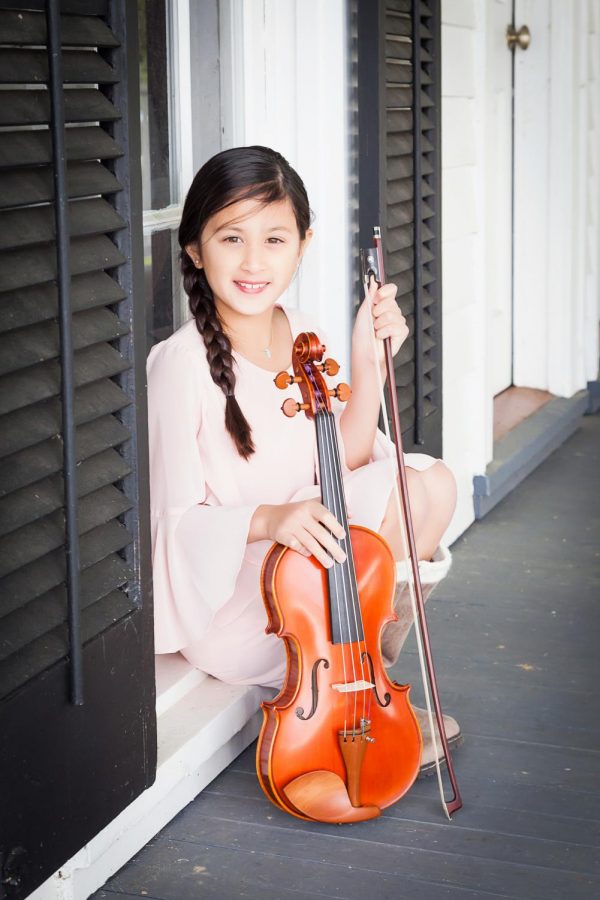 Alana Saenz, an 11-year-old musician, is the youngest member of the SLU Symphony Orchestra.

At the age of 11, a home-schooled violin prodigy has performed in concerts, won awards and recently placed in a prestigious competition.

As winner of the division, Saenz will perform as a soloist with the orchestra this spring.

“I knew how well prepared she was. I also thought that this particular piece really highlighted her talent and exactly the aspects of violin technique that she does well. I also knew that she practiced a lot this past year and grew tremendously in her musical artistry, so I was hoping that the jury would see what I knew to be true. Progress and talent and effort are easier for me to notice, because I hear Alana play every week, while the jury hears her only for 10 minutes,” Duke commented.

Saenz attended a 30-minute lesson with Duke each week for around six months leading up to the competition. She would practice an hour daily outside of these sessions, Alana said.

As the youngest member of SLU Symphony Orchestra, Saenz had performed onstage many times. However, performing in front of the judges was more nerve wracking.

“For some reason, I was more nervous playing for the judges than in front of a large audience. Maybe because they are professional musicians instead of regular people who just enjoy listening to music,” Saenz said.

Alana’s brother, Brennan Saenz, also competed in Concerto and was a runner up.

The brother-sister duo impress Duke with their dedicated work ethic and musical talent.

“Alana and her brother, Brennan Saenz, who is also a very good violinist and was chosen as the runner up at the GNOYO competition, are truly extraordinary students. Besides their undeniable gift for music performance, their work ethic is absolutely impeccable. They have never once showed up to a violin lesson unprepared. They have never expected to be spoon-fed the notes on the page, always practiced and learned on their own as much as they possibly could, so I’ve always had time on their short 30-minute lessons to teach them the things they could not do on their own,” Duke explained.

Saenz said she was thrilled to place higher than her brother in the competition.

“I was super excited that I beat my older brother! He is also a musician and sometimes we have to compete against each other. I was jumping up and down when I found out that I won,” he said.

Duke elaborated on the importance of music to human growth.

“Even if parents feel that their child’s musical talent may be average, or even less than average, practicing everyday teaches a child to work from a very young age, and it teaches them that 15 minutes of work every day adds up to a huge success at the end of the semester, or at the end of the year. Learning music is the best way to teach a child about living life and overcoming its challenges, and even though it is hard work for the musician, it is also the best recreation for the soul for both the performer and the listener,” Duke explained.