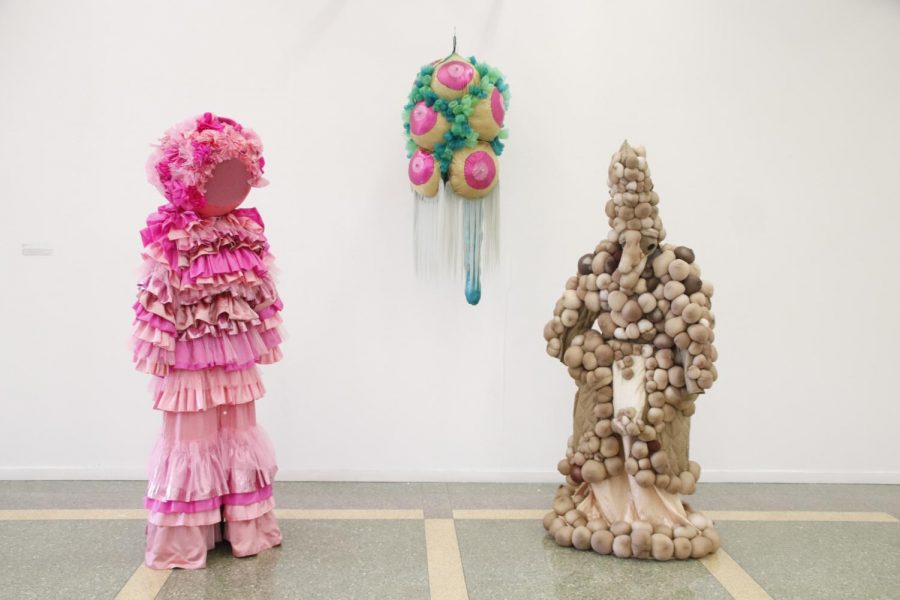 Christine Cook designs costumes for various performing arts, including the costumes pictured above. Her works are currently available for viewing in the Contemporary Art Gallery, along with several other faculty artworks.

The 2021 Faculty Art Exhibition is currently on display at the Contemporary Art Gallery to showcase artwork created by faculty members within the Department of Visual Art + Design.

Cristina Molina, associate professor of new media and animation, became the gallery director in the summer of 2020. She said the annual faculty exhibitions allow students and the rest of the community to see what they have been working on over the course of the year.

She explained, “It’s a way for the students that we all teach to get to know a little bit about our individual artistic practices and to show them that we’re working artists as well because students may not know that, that even though we teach art, 40% of our job is that we have to be dedicated to our own studio practices.”

The visual artist said that, while there is no specific theme for the exhibition, there is a purposeful relationship between where the pieces of art are placed in the gallery.

“When I organized it as curator, I do consider what works are fitting together within the given space, and how the viewers are walking through the space and how individual artworks can be in conversation with one another,” she said.

Molina has a performative video on display in the exhibition, titled “River River.” Molina and a collaborator of hers, both of whom are members of the 9th Ward Marching Band, addressed environmental and cultural topics through the filming of different sites along the Mississippi River.

In parts of the video, which took about five months to complete, Molina and her collaborator can be seen performing the marching band’s flag routines while onboard the Steamboat Natchez. She said they wanted to honor the Mississippi River and other parts of the regional culture while portraying their coexistence with environmental concerns.

“Along the way, there are these sites that you can see, like petrochemical plants and blighted properties, and more scenic areas in New Orleans that are a little more beautiful. You see all of these sights all at the same time — this industry, this joyous architecture, these blighted properties,” Molina described.

Ceramics professor Dennis Sipiorski has several ceramics pieces on display in addition to two acrylic paintings on paper. The acrylic pieces portray Sipiorski’s interpretation of the insurrection at the nation’s capitol that occurred on Jan. 6. One depicts red snake-like figures surrounding the building, and the other depicts fire ant-like figures in a similar way.

“Artists don’t usually do political art because the tendency is it’s hard to sell, but I didn’t make these with that intention. I made them to be a visual response to what went on in DC. It’s my visual response to what I thought was a sad event for our country, and maybe how you would explain that to maybe a child, on what happened,” he said.

Sipiorski mentioned that he chose ceramics pieces for the exhibition because it is the subject of his instruction. He said Molina had seen his paintings on Facebook and asked him to bring them in to be displayed as well.