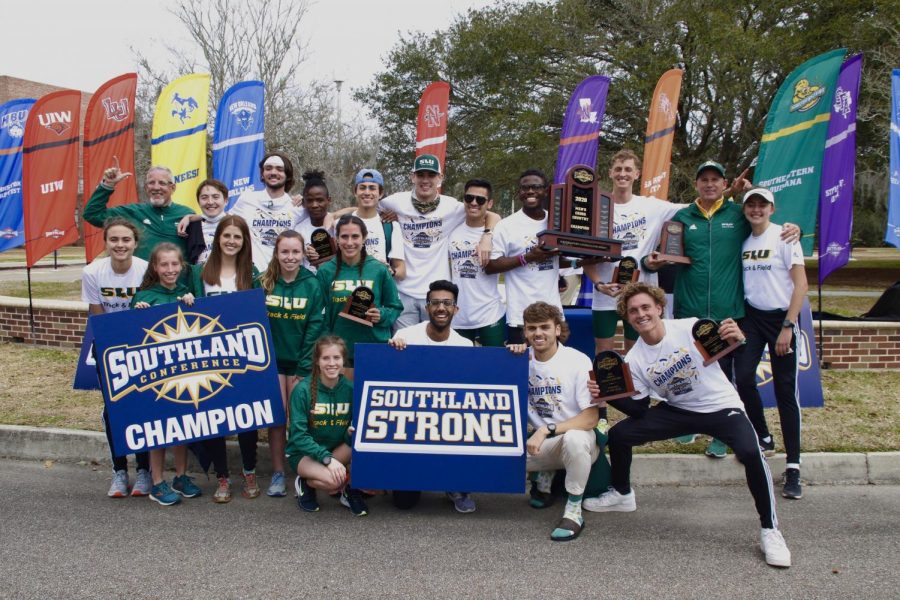 The Southeastern men’s cross country team made history this weekend as they claimed their first-ever conference championship on university record. Senior Shea Foster set an all-time Southland Conference record as he finished with a time of 22:41.16 in the men’s 8k race.

On Sunday, Feb. 21, the 2020 Southland Conference Championship started and finished on Ned McGehee Drive. In the 56 years of the race, the Lions’ win was also the second-largest margin of victory (77) in championship history.

Foster was the first to set a new record high in the Conference since 2014, but what many may not know is that he sustained a severe knee injury last year.

“I got in a bad car accident in July. With my knee injury—I had surgery in September—they said I was going to be out for four months, no running. I told them, ‘You’re lying,’ and I was right. I did whatever I could. I was going to treatment four to five times a day. It wasn’t pretty, but I ended up starting to run again in like 16 days. I still have some problems, but it’s way better than not running,” Foster said.

Foster described the moment he was able to share the victory with his loved ones.

“It was awesome. For it to be at our home course in front of everyone who has been along this journey with the team, and my mom and my sister came to watch, along with a lot of people who have just seen all of us grow as runners and as people, it was really cool just having that moment with everyone I care about,” he said.

Foster ran back to cheer on his teammates as soon as he crossed the finish line, according to his teammate Cortez.

“Shea talked in his interview after the race about how even though he finished and won and broke all these records when he finished nothing really mattered except ‘Where are my teammates?’ He just won the Conference, and the first thing he did was turn around and check where all of us were,” Cortez said.

Cortez said he felt confident in his team’s ability to win, but that did not make the moment any less special.

“We talked last week about how if we just did what we were capable of doing, we were going to win. There was a weird calmness in it. It didn’t really sink in until I went home and I was looking at the results and holding the trophy. It was pretty special, especially going out as a senior. Our team has struggled so much in the past, and to do it with that group of guys, it was pretty special,” Cortez said.

With the championship under their belt, Foster mentioned the team might have a shot at nationals.

“This was something that meant a lot to all of us. We sacrificed a ton. It might not even be our last race. There’s word going around that we might have a chance to make it to nationals as a team,” Foster said.

Next in his journey, Foster will continue running and pursue his master’s degree as he transfers to the University of Oklahoma. He said his Hammond family will always have a place in his heart.

“Southeastern is one of the best things to ever happen to me. I didn’t think much of it when I first came here. The group of guys we have on the team—it’s truly amazing. Yeah, we were trying to win, but when you have that much fun, it doesn’t feel like a job. You’re just there with the boys,” Foster said.

Cortez reflected on his past four years on the team, sharing similar sentiments to Foster.

He said, “We’ve been running together for years, and we’ve put so many miles in and we’ve failed over and over again and set these high goals, and just doing it as a senior, it was really poetic. It was one of those moments that I’ll look back on fondly for the rest of my life.”