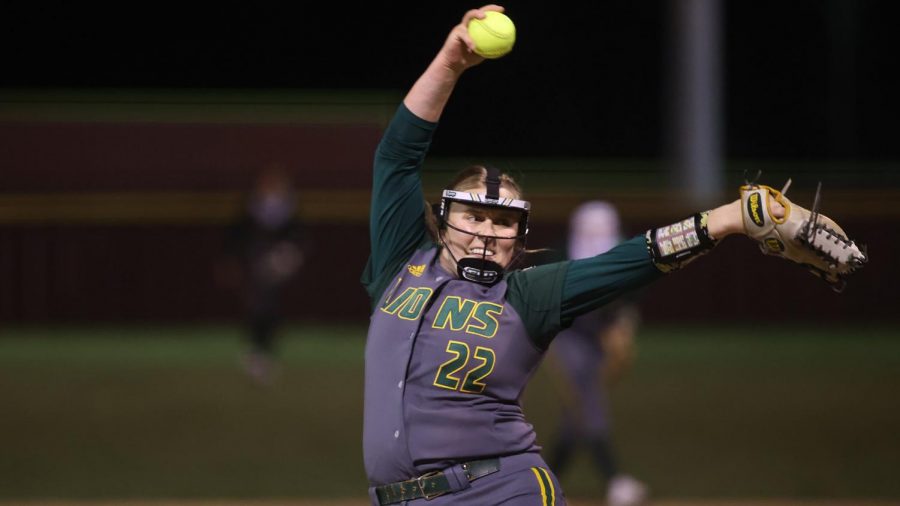 Senior pitcher Heather Zumo winds up for a pitch during the Lion Classic opening series. She pitched the seventh no-hitter in Southeastern history against South Dakota in the first game of the season.

Senior pitcher Heather Zumo began her final season with the Lady Lions by throwing a no-hitter against South Dakota in the Lion Classic tournament, allowing the team to secure their first win of the 2021 season.

The Baton Rouge native transferred from LSU Eunice after the 2019 season, where she was an All-Region pitcher. She finished 20-2 with a 2.77 earned run average as a sophomore and recorded 177 strikeouts as a freshman, helping the Lady Bengals to win a national championship along the way.

Game one in the Lion Classic was the team’s first time playing in 336 days after last season was cut short. Zumo said it felt good to compete again, and she is looking forward to her final season.

“I feel like I have improved a lot within the past year or so, but I think being more aware of focusing in more and having a better mindset, and also just realizing this is my last go-round and just to compete more and give it my all every single pitch,” Zumo said.

The state experienced record-low temperatures the week of the opening tournament. Zumo explained how she stayed focused while pitching outdoors in the freezing weather.

“Although it was really cold outside, I feel like I’ve never pitched in that cold degree weather before, but I think I just had to face adversity and fight through it even though it was super cold. Just keep my blood flowing the whole time and just really focused on hitting my spots, and I think I did that well,” she said.

Zumo said her team, the coaches and the pitching staff have all motivated her throughout her time at the university, which has helped her get where she is today.

“I think everybody is so uplifting and positive, and we all work together as a team, and it just pushed everyone else a bit more,” she said.

Zumo has another year left of school but will not be returning to the team next season. As a transfer, Zumo said she was initially nervous about joining the team. Now, she considers the softball program family and encourages future Lady Lions to enjoy the experience.

She said, “Any advice I would give to anybody is definitely take the chance if you have the opportunity, and statistically, I think Southeastern is such an awesome school. Especially the softball program, the coaches are so welcoming.”

Head Softball Coach Rick Fremin said Zumo closed out the final game of the shortened 2020 season against Appalachian State. While the game was a loss for the Lady Lions, Fremin said she pitched a good game.

“If you go back and look at the stat-line against App State, she was lights out. She did a real good job, and I just told her, you need to pick up right where you left off, and so she did,” he said.

The sixth-year head coach said Zumo has grown into her role as a leader on the team over the past year. He looks forward to seeing her lead the staff and seeing how the other pitchers learn from her this season.

“I think she’s become more mentally tough, and I feel that she’s more of a leader, become more outspoken, and with her being a senior, we need that from her. I was not surprised that she was able to throw the no-hitter shutout there against South Dakota on Thursday in the opening game because that’s what’s expected of her,” Fremin shared.

Not only will Zumo be a weekend starter in conference games this season, but Fremin also said she received recognition from the Southland Conference this week.

He said, “She’s been in a lot of innings this past week, and not only did she get the no-hitter, but she got Pitcher of the Week in the Southland Conference. Hopefully, that can continue and other people can recognize her accomplishments.”