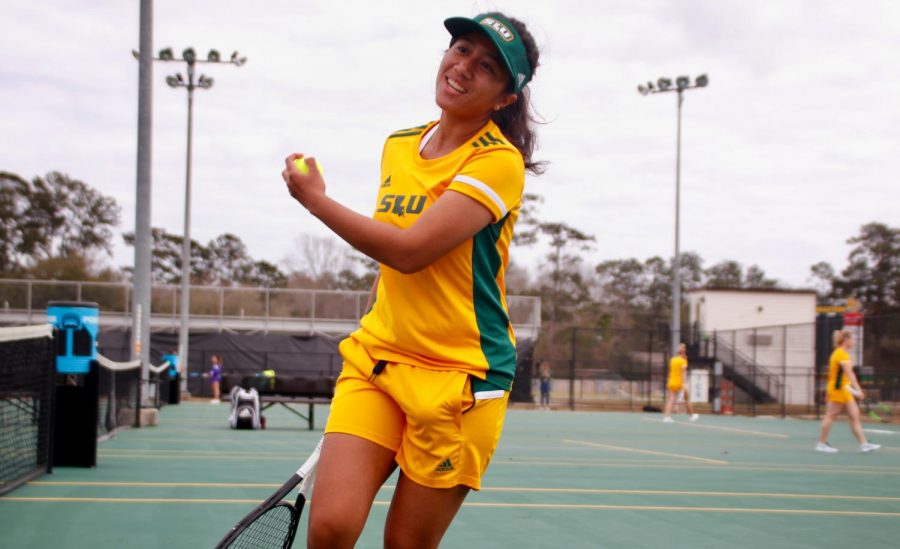 In the home opener on Feb. 21, sophomore tennis player Putri Insani, above, earned a 6-0 win in the doubles round with junior Ximena Yanez and a 6-3, 6-0 win in the singles round.

The university women’s tennis team claimed its first home victory this season with a 6-1 non-conference win against LSU Alexandria on Feb. 21.

Shattering a three-match losing streak, the Lady Lions (2-3) swept the Generals in all three doubles matches and five of six singles matches. The match counted as an exhibition for the Generals.

The Lady Lions’ domination began early in the doubles round, with sophomore Putri Insani and junior Ximena Yanez earning a 6-0 win on court No. 1. On No. 2, sophomore Flory Bierma and freshman Annemart Kleijn also soared past their opponents 6-0. Junior Katya Cornejo and freshman Polina Sleptsova finished the sweep in the No. 3 spot with a 6-1 victory.

After starting her match flustered by the 15 mph winds, Insani regained her composure and fought harder for the team.

“I feel like I was struggling in my early game because I was kind of overwhelmed by everything. Yesterday, I was playing a higher-paced match, and today it was really windy and it was all at a different pace than yesterday, but I am happy I was able to overcome it. I was proud that I could come out of the struggle. We were pretty loud and pretty aggressive today, so it was a good match,” Insani said.

The team achieved similar success in the singles round. Insani put forth a 6-3, 6-0 victory on the No. 1 court, freshman Ariadna Perez earned her first collegiate singles win with 6-3, 6-0 score on No. 6 and freshman Teodora Mitrovic secured the team win with a 6-2, 6-4 victory on No. 3. The other singles matches went to three sets.

“We had really good body language, and we were really positive. I felt that we fought really well today, and I think we’re all just excited to get the season started for conference play,” Assistant Tennis Coach Dalina Dahlmans said.

Dahlmans said the team will prioritize conditioning as they prepare for the Southland Conference schedule.

She said, “We’ve been working really hard on conditioning. I think we can always improve a little bit more to get them as fit as we can before we start our first conference match because we know those will be long matches and long weekends ahead, so conditioning is our top priority.”

Despite multiple schedule interruptions with postponed and canceled games, Dahlmans believes the team is closer and stronger than before.

“It honestly brought us closer because we’re all in this together at this point. Unfortunately, we cannot change what is happening in the world, but we can prepare ourselves as best as possible to get back right at it when we’re fit again,” Dahlmans said.

The team will close out its pre-conference schedule on Feb. 23 as they travel to UL Lafayette for a 6 p.m. match.