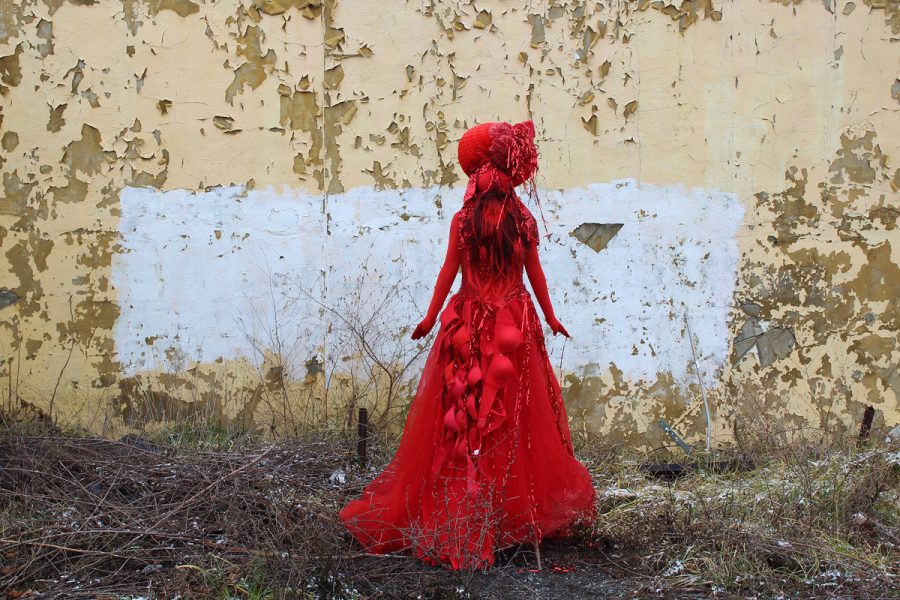 Assistant professor and professional costume designer Christine Crook displays one of her designs from an independent project she created at Light Box, located in Detroit, Mich. Crook plans to submit a brand new design for the Wearable Arts Fashion Show on March 18.

The search for the next Alexander McQueen is on as the university revs up the runway for its latest contemporary fashion show.

Hosted by the Department of Visual Arts + Design, the Wearable Arts Fashion Show is set to take place on March 18 in the Vonnie Borden Theatre. The event is still welcoming new participants to model, assist in production or even design a creation of their own. As a prize, the top three looks will be presented in the Contemporary Art Gallery.

Christine Crook, faculty advisor for the show, said she is enjoying her second semester on campus as assistant professor of costume design and makeup technology.

According to Crook, the fashion show is an opportunity to not only integrate different art disciplines but also to diversify student engagement.

“I’m seeing that there can be a disconnect between all of the various studies and artistic disciplines in our department, and this is a way to invite community and connection between disciplines that might not be normally interacting. Also, it’s a way to invite other students who may not even be studying art or fashion,” Crook said.

The Wearable Arts Fashion Show made its university debut in 2019 at the Contemporary Art Gallery. Although campus closure prevented last year’s production from occurring, senior art major Nathaniel Britton is determined to bring the runway back to life.

As creative director, Britton said he looks forward to seeing the show come together.

“We have such incredible designers from the art department, really intelligent people who have a great eye for art and fashion. We have so many people from different backgrounds all over the school, it’s just so many people bringing their own take on what wearable art is. It’s going to be magical,” Britton said.

Britton plans to submit his own design for the show, which will also serve his senior thesis. He described what the term “wearable art” means to him.

“It is a mix between fashion and visual arts. You can take the route of where your base is visual art and you incorporate fashion into it, like taking a sculpture and making it wearable. Or, you can take fashion and elevate it using art concepts. It’s so open, and that’s what makes it so electric,” Britton said.

As a professional costume designer, Crook also looks forward to submitting a new design of her own, a design that incorporates the use of old discarded wigs from previous university plays.

“With wearable art, there is so much room to be abstract and poetic or even create a political message. I know there are some artists creating pieces that are reflecting on the pandemic, sexual assault and some other deeper issues. Art really has this wonderful way of being able to create awareness and conversation,” she said.

Britton believes this is an event students and members of the community will not want to miss out on.

“It’s a rare event. Some people may never experience something like this again. It’s such a collaboration of visual art and fashion and modelling—so many bits and pieces go into putting on this event. It’s not something you see every day, so I just think it can be a really great experience to anyone who wants to participate,” he said.