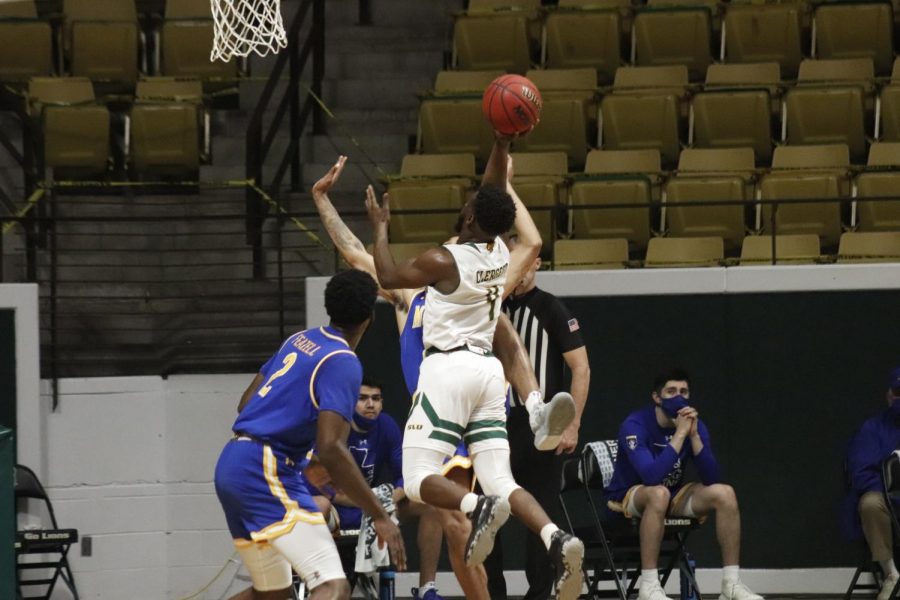 Senior guard Keon Clergeot pushes through the Cowboys' defense and goes for a shot during the last home game of the 2021 season against McNeese State University on Feb. 24.

The McNeese State University Cowboys defeated the Lions men’s basketball team 95-91 in their second matchup of the season.

Last night’s game in the University Center was the final home game of the season, with five Lions scoring in double figures, pushing the Cowboys in a close game. The Lions scored 28 points off turnovers and 26 fast break points. Both teams scored 38 points in the paint.

The Cowboys gained the highest lead of the game at 14 points with seven minutes left, but the Lions fought to score 12 unanswered points in the next three minutes, bringing the score to 80-78. The final two minutes saw points from both teams including two 3-pointers from junior guard Joe Kasperzyk, but the Cowboys maintained their lead through the buzzer.

Sophomore guard/forward Nick Caldwell scored 17 points with three 3-pointers and eight rebounds. He said the team had a stronger offense at last night’s game and could have come out harder on defense overall.

He said, “We did not play good on defense last night. 95 points is unacceptable any night, but I don’t think we did our best on either end. We turned the ball over some and didn’t get enough stops.”

The Geismar native said, in order for the team to win, staying locked in for the full 40 minutes and maintaining focus in the final stretch of the game is essential to grab a victory.

“The main thing is, we just got to be better in clutch situations like down in the stretch, we’re down by five with five minutes left, and we could never seem to get close enough to them. We just kept giving them that big lead. We just have to be better in certain situations, plain and simple,” he said.

Caldwell mentioned how Head Coach David Kiefer coaches them during the timeouts in the last few minutes of the game.

“When the game’s close, you just have to have poise and stay together. You can’t lose focus. He just tells us to keep up, stay locked in, stay together, and get the job done,” he said.

After playing Texas A&M in Corpus Christi on Monday, the Lions traveled home on Tuesday and returned late that night.

The team will be on the road for their next three games. They will travel to Natchitoches on Feb. 27 to face the Northwestern State University Demons at 3 p.m.