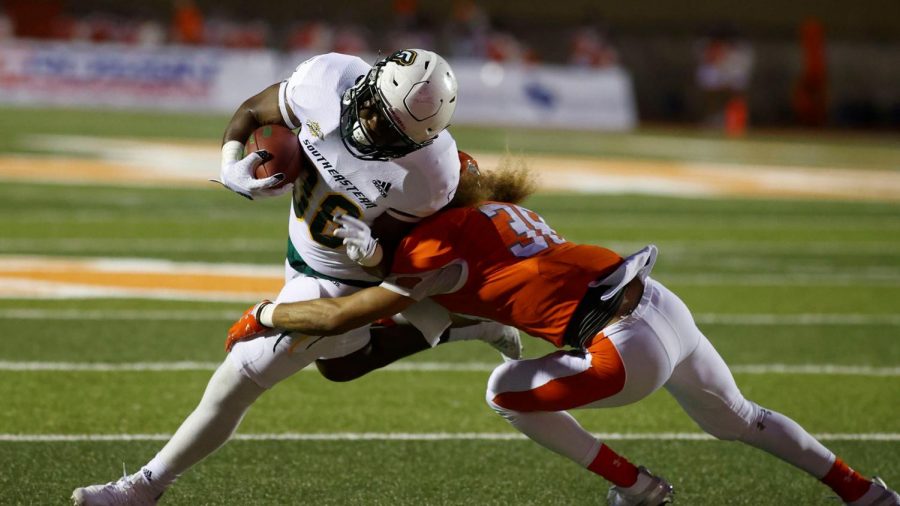 Senior fullback Damien Dawson gets tackled in the red zone.

The Lady Lions women’s basketball team continued to stay hot as they extended their winning streak to six games with victories over McNeese State University and Northwestern State University.

“We’ve been playing so well together as a team. We’re seeing different people step up for us every game, which is an encouraging sign,” Guzzardo said.

Last season’s defensive flaws followed the Lions into their first game of the unique 2021 season as the Bearkats toppled the Lions 43-38.

Starting quarterback, Cole Kelley notched a career high as he threw for 462 yards, 4 touchdowns and 0 interceptions. The Lions will look to get into the win column on March 6 at home against in-state rival McNeese State University.

The baseball team took its talents to Tucson, Ariz. to face off in a four game series against Arizona University. The Wildcats swept the Lions in the four game series as it was both teams’ first time matching up against each other on the diamond.

Southeastern’s pitching struggled throughout the series facing a potent Arizona offense by giving up 38 runs, and 54 hits during the four game stretch. The Lions will face Tulane University on Wednesday, March 3 at home and try to get back into the win column.

After knocking off Texas A&M University- Corpus Christi on Feb. 22 the men’s basketball team lost two straight to McNeese State University and Northwestern State University. The Lions have been rocky all season long as the team currently sits at a 7-15 record.

Currently, the Lions sit at eighth in the Southland Conference and will hit the road to face a hot University of Central Arkansas on March 3 in Conway, Ar.

Women’s Beach Volleyball started their season on Feb. 26 in Elmwood against Southland rival University of New Orleans in a 3-1 loss.

Women’s Soccer also saw heavy action last week in their two matchups against Central Arkansas and Northwestern State, both resulting in losses for the Lady Lions.

“Northwestern State’s game plan was good.They’re always defensively organized, disciplined and structured. I thought after halftime we were against it for the first 10 minutes of the second half, but we did a good job of getting some momentum and creating opportunities,” McBride said.

The Southeastern women’s tennis team was victorious last week as they knocked off Southland opponent Incarnate Word University at home 4-3. The Lady Lions sit currently at 3-5 and will face Texas A&M-Corpus Christi on March 5 in Texas.

After dropping 3 of 4 games at the UAB Green and Gold Classic, the Lady Lions softball squad got back into the win column over the weekend at the FSU Unconquered Invitational defeating Florida A&M University twice and Florida Gulf Coast University in a 1-0 defensive matchup.

Up next for the team will be a two game series at home against Louisiana Tech on March 3, the Lady Lions currently sit at 7-6 on the 2021 season.