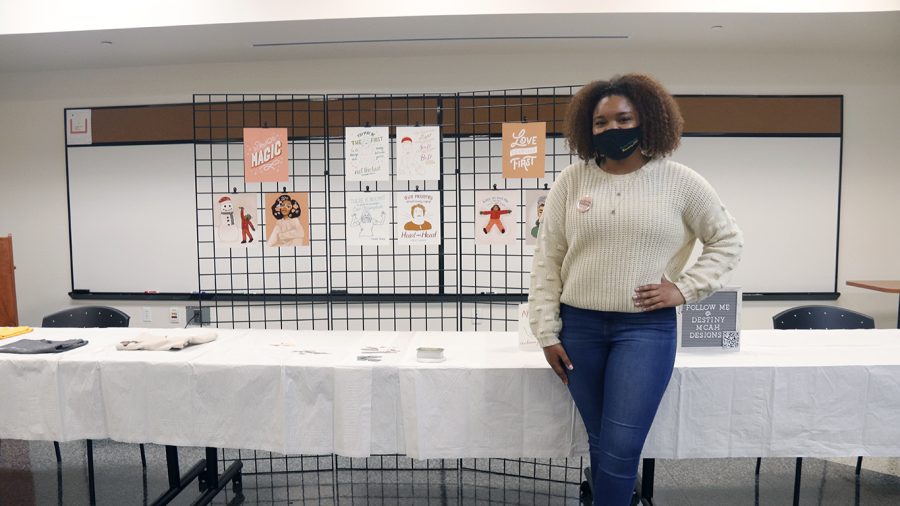 In addition to MISA using its regular staff to coordinate and work the exhibit, they also extended a welcome for volunteers to Student Government Affairs and the National Association for the Advancement of Colored People chapter on campus.

The University’s Multicultural and International Student Affairs division hosted Exhibiting African American Culture, an event meant to showcase African American talent and culture through the lens of the students that live on campus.

Up next was Michelle Brister, a music major, who covered the classic soul song, “A Change is Gonna Come” by Sam Cooke on her electric guitar. Last of the individual performers was Claraion Hill, a senior early childhood education major, who recited “Phenomenal Woman” by Maya Angelou.

The event was rounded out by Jarrod Benjamin who gave a keynote address entitled “Change Agents, from Oppressed to Success.”

After her performance, Hill discussed how she became involved with the event, noting that she needed little time to prepare because of how well she knows the poem from performing at previous Black history events.

“Once L’Oreal contacted me about two weeks in advance I chose that poem but it is never super hard to perform because I have done it so many times now. It is also a poem that I can relate to, so it’s easy to feel,” Hil said.

At the end of the event, students were given the option to go across the walkway to view the art created by students on campus or stay in the theater and play different Kahoots, which asked questions about African American trivia.

She said, “I thought it was a wonderful event. I truly enjoyed all the other performers and speakers. And I can’t wait to see the other part of the exhibition that they have planned.”

In addition to MISA using its regular staff to coordinate and work the exhibit, they also extended a welcome for volunteers to Student Government Affairs and the National Association for the Advancement of Colored People chapter on campus.

One of the NAACP volunteers, Elan Williams, a junior majoring in health sciences, was happy to lend a helping hand.

“We had an NAACP meeting and they told us MISA was having this so I signed up because it looked fun and I thought it would be nice to help out,” Williams said.

She also expressed her appreciation for the performances and how well the art gallery was organized.

“I think it went really good. We had a really good turnout. I liked how we set up all the pieces in the exhibit. It was smooth and everyone tonight did well, especially the performance of the guest speaker.”

The art pieces were the second part of the exhibition; a tour guide from MISA walked everyone through multiple rooms which showcased different kinds of pieces from black and white canvases, to abstract Rico Nasty drawings and photographs of everyday citizens.

One artist, Sieara Williams, a sophomore marketing major, painted a colorful portrait of the rapper Tyler, The Creator.

“It might have taken me about a month to do but I already had the piece ready before I received the call to be in the gallery but I think everyone enjoyed all the different artwork that we presented,” she said.

Based on the success of this event, MISA is planning on hosting many more events to celebrate Black culture. For more information on MISA and their upcoming events, visit their website.