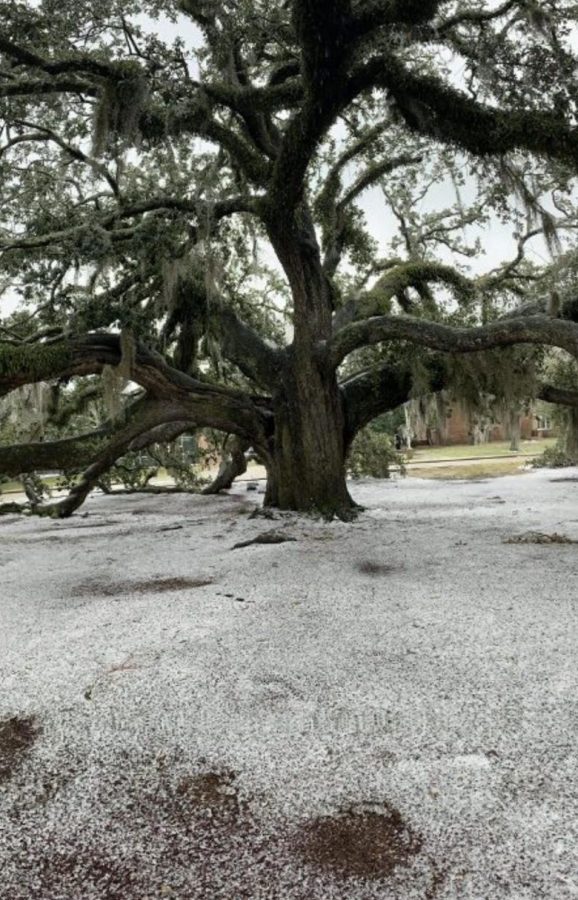 Freshman accounting major Jordan Blake walked around campus and took pictures of her “winter wonderland” on campus. The ground froze underneath the campus oak trees.

Louisiana is not known for being cold. At least, it was not until a few weeks ago.

During Mardi Gras break, Louisiana residents, along with our other southern neighbors, experienced record low temperatures, with the highest not exceeding the 40s for several days.

Many students stayed on campus for the freezing weather.

Freshman nursing major Allison Davis shared how the weather and ice affected her experience around campus.

“My car was completely encased in ice, and I had icicles hanging off my balcony,” Davis said.

She lives off campus in an apartment nearby, and the roads were completely frozen over, according to Davis.

Davis shared that the worst part about the weather was being in her apartment.

“The worst part was definitely being stuck in my apartment because I was too scared to drive on the ice,” she said.

Davis also sympathizes with her mother’s friends who live in Texas and were completely snowed in.

She said, “It’s devastating what happened over there. People were saying they deserved it for being a ‘red’ state, which is absolutely ridiculous. They live in the Texas panhandle, so they were snowed in and without power or water for a good while.”

While Davis is not a fan of the cooler climate, freshman supply chain management major Nicholas Perrin grew up in the snow.

He said, “I grew up in Moscow, Russia. I was put up for adoption after I was born, and then I finally was adopted when I was three years old. I moved into the United States when I was three in 2004, and I remember not going to sleep the entire plane ride to America and going up and down the aisles of the plane saying ‘hi’ to everyone in Russian.”

The snow here was nothing compared to Russia, according to Perrin.

“I did not see that much ice compared to the snow in Russia because I stayed put in the Pike House,” he said.

Freshman accounting major Jordan Blakeman believed the weather was fine for a bit but would not want it to stay like that forever.

Blakeman adored the snow and expressed her joy in the “winter wonderland” aspect of the weather.

She shared, “I didn’t drive during that time because I heard I-55 was frozen over. Ice covered the windshields of all the cars in the parking lot. I went walking around after the rain settled down, and it was very pretty. It was just me and the frozen campus. Friendship Oak was very beautiful. What little snow we did get stayed under the branches, and it looked like a ‘winter wonderland.’“