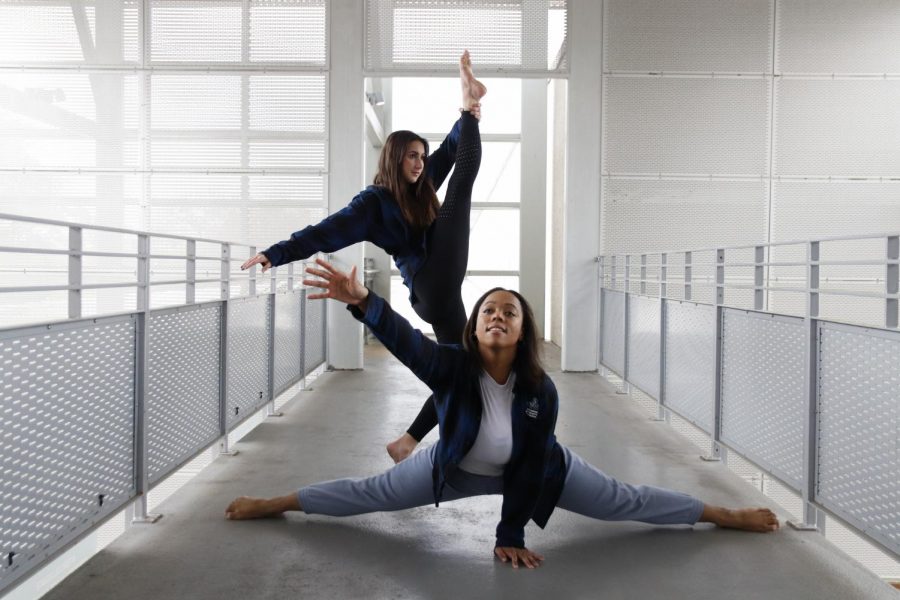 Student choreographers Emma Pinion and Stephanie Harris show off their abilities before their senior dance concerts. The artistic directors have been preparing for their senior thesis performances on March 14 and 15.

Senior dance students are set to close out the contemporary dance season with an original capstone experience.

On March 14-15 at 7:30 p.m. in the Vonnie Borden Theatre, graduating seniors Emma Pinion and Stephanie Harris will be presenting their senior theses in the form of dance concerts.

Harris, a general studies major with a concentration in dance, will begin the thesis concerts with her concert titled “Hideaway” on Sunday, March 14.

She said she hopes to convey feelings of nostalgia as she dances for the university one last time.

“My thesis is on how the right music, and the way you edit it, can transport an audience with choreography. That’s where I am aiming to go with this show. I want to present it in a nostalgic feeling to everyone and the show is mostly about my passion for dance and why I do it and the things I love about it,” Harris said.

According to Harris, the title “Hideaway” came from her wanting the audience to imagine a place where they can go to escape, which for her is the dance studio.

Emma Pinion, a biology education major, will have her production titled “Overcomer: The Journey” on Monday, March 15.

Pinion’s thesis concert is based on the concept of using dance as an outlet.

She said, “It’s about using dance as a therapy and really embracing yourself through movement and overcoming situations by finding yourself through dance. Each dance represents a different situation in which people can overcome, like depression or a loss of a family member.”

Both Harris and Pinion have had a little over two hours each week for rehearsal since October of last year. They alternate between rehearsals in the morning and in the evening. Next week will be their last week of rehearsals before the concerts.

The graduating seniors said they feel sentimental in regards to leaving their departments and how much the departments have changed their lives.

“This department kind of changed my life and so leaving it after this feels so crazy leaving everything I have learned and experienced. I am probably going to be a puddle of tears at both of our shows,” Harris commented.

Harris started dancing around age three, and she played soccer around the sametime. She said her parents had not allowed her to dance competitively so she quit dancing for a while to pursue soccer.

“I think that follows me to this day because I choreograph a little more athletically than most people from my years in soccer and then from not being able to do competitive dance either I think it made me a bit more passionate about dancing since I didn’t get to experience everything I wanted to experience as a kid,” Harris said.

Unlike Harris, Pinion had a background in competitive dance and when attending Southeastern, she discovered her passion for contemporary dance.

According to Harris and Pinion, they put hard work into their upcoming shows and urge students, faculty and staff to attend the concerts.

“I think people should attend these performances because Emma and I together have put everything into these works. It’s really just an opportunity to show who you are going to be and what you’re going to make of yourself,” Harris said.

Tickets are for sale at $10 for students, seniors, children and military. General admission tickets are $12. Guests can purchase tickets in the lobby one hour before the performance.