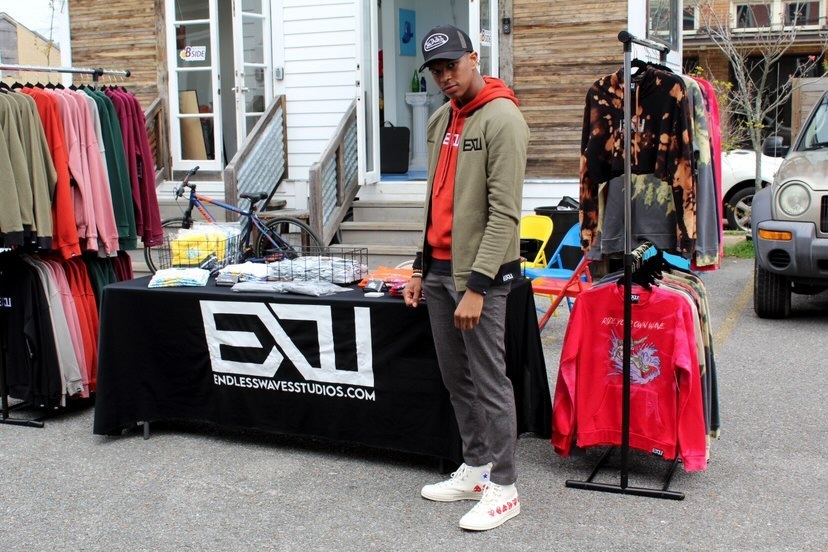 Butler standing by his business’ first pop-up shop in Baton Rouge. Butler was thankful for everyone who had come to support him at his pop-up shop

The phrase “ride your own wave” could be interpreted in various ways. For SGA Vice President Darnell Butler Jr., it means believing in oneself and thinking outside of the box to overcome obstacles.

After graduating high school in 2017, Butler started his own business: Endless Waves Studios. The brand encourages people to be themselves and to be passionate about what they love doing, according to Butler.

Operating a business has been challenging at times for Butler, with balancing school responsibilities and work. While on campus, Butler makes a point to take care of his school work and tasks as SGA vice president. Once he gets home, he focuses on his business.

Butler described the duties and responsibilities of his one-man business.

He said, “When you’re one person operating a business, you have to do all of your marketing and productions. So, when I am getting ready to launch a product, I first take photos for that project, upload the product to the website, and then do orders as orders come in. In my free time, I fulfill orders as they are coming in. It’s a cycle of balancing.”

According to Butler, the biggest challenge is consistency. However, even with these obstacles, Butler said he does not regret a thing because he knows it is a process.

“It takes time to build a business and if you want to do something big you’re eventually going to need a team. So, the biggest thing for me right now is finding genuine people that I can start building a team with so I can have more time to do other things instead of sewing a label on a shirt or printing out shipping labels,” Butler said.

The name Endless Waves came from a list of random words Butler wrote down in an attempt to find a name that meant something to him.

At first, the business focused on clothing, but it was not until his first photo shoot where that had changed.

“At my very first photo shoot, I didn’t want to pay for a professional photographer so I decided to buy a Canon camera and spent like $400-500 on the camera. After getting the camera, I fell in love with photography and eventually wanted to get into visual arts. Photography led me to take pictures of events for other people, so that is why the brand now is not just based on apparel but visual arts and events,” Butler said.

Larry Overton, a friend of Butler’s, operates his own business, Overton Estates, in the Greensburg area. Overton helps with his knowledge of strategic sales and marketing to help Butler move his products. According to Overton, Butler is a great businessman and has a great deal of potential.

“Darnell has to be one of the hardest working people that I know. His determination to be the best is truly inspiring. He is one of those people who become so meticulous about the placement, color and fabric that his brand uses. Darnell is extremely invested in his business,” Overton said.

From selling T-shirts on campus in his dorm, Butler is seeing his brand grow each and every day.

Butler sets out to embody his brand’s mission statement of believing in yourself and thinking outside of the box to overcome obstacles in your way.