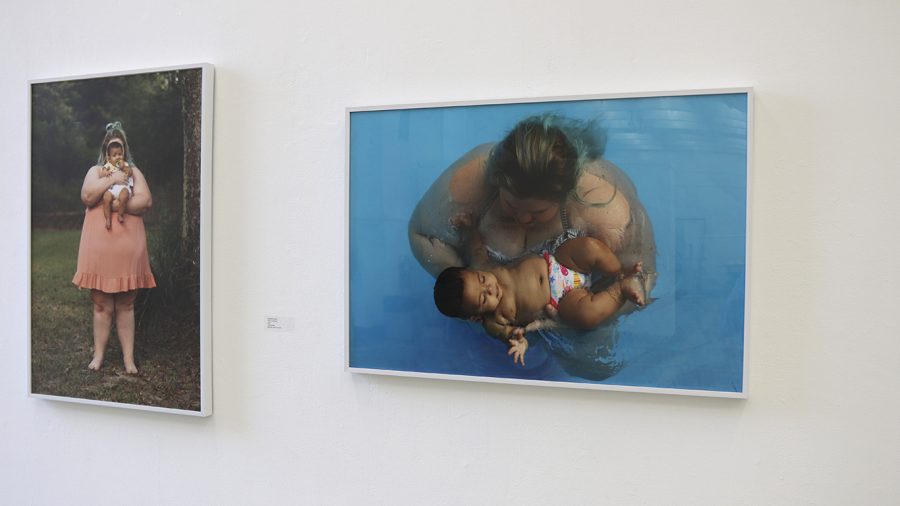 Senior art student Gabrielle Barnett's photo collection, titled "Motherhood," is currently on display in the Contemporary Art Gallery. Several of her photos feature herself with her child, Georgia. The 2021 Juried Student Exhibition is available for viewing in the gallery until March 31.

Despite COVID-19 restrictions, the art department was still able to host its 2021 Juried Student Exhibition for the annual art showcase for students all over campus.

Every spring, the department seeks artwork from students of all majors for the exhibition.

The art can range from visual and plastic art such as painting and symbolic sculptures all the way to digital art, including homemade videos of the artists reading a poem or going through their day in an interesting aesthetic.

Christina Molina, gallery director and associate professor of new media and animation, explained that students were able to submit however many pieces they please, and two jurors from outside the university chose which pieces to appear in the showcase.

Molina said, “They can choose as many students as they want. They chose about 40 this year. They are looking for artwork that exhibits excellence in craft, promotes conversation and content in its theme, as a whole represents students at all different levels of expertise and different art mediums.”

One student can be put into the gallery for different submissions any number of times––there is no limit.

The jurors were Cheryl Hayes, a well-traveled artist and retired emeritus professor at UNO, and Garima Thakur, an interdisciplinary artist raised in New Delhi, India who currently works as associate professor of interaction media and graphic design at Western Oregon University.

Submissions were due Feb. 18 and artwork was selected for the exhibition between Feb. 23-25.

Addison said, “When I got the email that my art was selected I was very happy and excited. I’ve only been in one art show before this one and that was years ago in high school.”

Her chosen submissions included a printed picture that was originally digital called “Don’t Look,” an acrylic ink relief print named “The Sins of Hands,” and a video performance originally performed for her time-based media class that features her sister Yaminah Addison, named “My Crown.”

In her “My Crown” piece, she is braiding her sister’s hair while her sister is reciting the Crown Act, a law that has only passed in a few states that prohibit race-based discrimination in the workplace or school due to hair texture or protective styles including braids, locs, etc.

The art description explained the piece is pointing to the pressures and struggles that Black people deal with in the professional work environment concerning appearance with specific regard to hair.

Addison said, “I hope people are able to look at my art and take something away from it whether it be a profound message or just an interesting and well-done interpretation of a concept.”

The exhibition is being hosted in the Contemporary Art Gallery by Strawberry Stadium. It is open to the public until March 31.