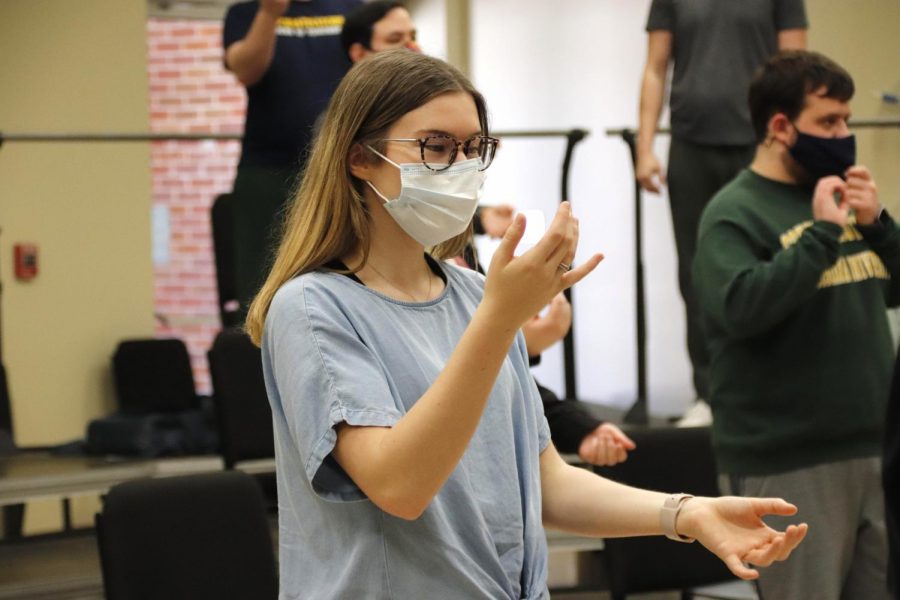 University choir members stretch during warmups at rehearsal on March 16 in preparation for the concert at First Baptist Church in Hammond on April 29. The performance will honor African American artists and their compositions.

Music has been around for almost 40,000 years and continues to evolve every day.

African American music has especially evolved and has positively impacted the music industry in multiple ways.

On April 29, the university’s music department will be holding a tribute to African American music at First Baptist Church in Hammond.

Director of Choral Activities and Choir Conductor Dr. Alissa Rowe explained how the idea of the tribute came to be.

“After last spring and the death of George Floyd, I started reading a lot and really getting involved in discussions, friends and colleagues of mine, and I decided I had never done a program with all Black-American composers,” she said.

Rowe said she is most excited about the process and the research involved with the project. She said she wants her students to learn more about the music and history.

She commented, “I’m most excited about the process that’s going to get us to the event. The students are reading books, we are watching a variety of panels, and every day we are having discussions about issues as well. There’s a lot more than just singing going on, and I’m most excited to share the music by Black-American composers that’s not idiomatic.”

The tribute will include much more than just gospel music, according to Rowe. She said the choir will be celebrating any and all genres written by Black-American composers.

Feeling connected to composer Margaret Bonds, Rowe said it is because of her ability to bring a poem to life. She said she enjoys how students were so excited to learn more about Bonds’ music.

“The piece I connect with the most is one called, ‘The Negro Speaks of Rivers.’ It’s a poem by Langston Hughes, and the composer is Margaret Bonds. A lot of the students had an assignment where they had to listen to a different piece by her, and they all raved about her music,” she said.

Sophomore Music Education major Dallas McAlister further detailed which musical composers the department will be honoring at the event.

He said, “Chosen by the singers to audition with as well as solos from other composers, we are covering Rosephayne Powell, Adolphus Hailstork, Stacey V. Gibbs, Margaret Bonds who used a poem by Langston Hughes, Bobby McFerrin, Nathaniel Dett and James Furman.”

McAlister also said he feels he connects most with pieces by Margaret Bonds and Langston Hughes because of their more contemporary styles.

“The one I like the most, because it takes a while to connect with newer composers, is the piece by Margaret Bonds and Langston Hughes,” he shared.

According to McAlister, he loves to sing just about anything except country. He mainly sings musical theatre-inspired tunes.

He said, “I personally love to sing anything, with the exception of modern ‘stadium country,’ which is usually about how the artist has a really big truck or a good beer or a hot woman, but I will normally sing or play musical theatre or alternative.”

Senior Vocal Performance major Camryn Rodrigue talked about her connection with one musical composer she has worked on in class.

“I feel like I can relate to Rosephayne Powell the most because as a woman, it’s very difficult to succeed and get the ‘one up’ in almost any field. She was disregarded primarily because of her race but also because of her womanhood,” she said.

Rodrigue, in discussing what she is most excited about for the event, said she cannot wait to explore different styles of music written by Black composers.

She said, “Usually when people think of Black composers, spirituals and gospels come to mind. However, this concert is showing and displaying all sorts of other forms of music that they’ve created. I’m excited to finally be able to listen and take part in honoring that part of music history.”

To view the tribute, tune into the KSLU Facebook page as they go live on April 29 for anyone to watch at no limited capacity.