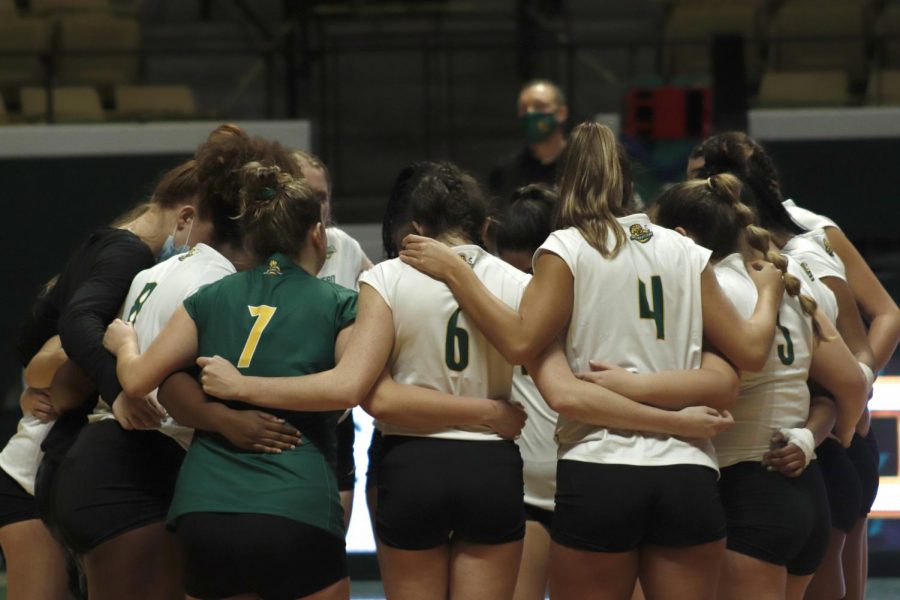 The Lady Lions volleyball team huddles up before their game against Sam Houston State University. On April 1 Southeastern will be back in action in the Southland Conference Tournament.

The Lady Lions Indoor Volleyball team wrapped up their historic 2021 season on Saturday finishing with an 11-4 overall record.

Second-year head coach Jeremy White led Southeastern to its winningest record in program history and will also look to guide the Lady Lions to their first-ever Southland Conference Tournament Victory.

White shared what led the Lady Lions to their historic season after finishing with a 14-17 record in 2019.

“It was simple players bought into our system early. They understood that the team needed to be built around defense. The girls understood what needed to be done and trusted the coaching staff,” White said.

The Vidor, Texas native shared who were some of the team leaders over the course of the regular season.

“Arianna Hebert was a big contributor to our success this season. Crispin Adams was a big help this season as well at middle blocker, she was great on the defensive side of the ball. Kailin Newsome was also an amazing offensive asset to our team, she was a great addition as a freshman,” White shared.

With no season during 2020 White explained how the elongated off-season helped prepare the Lady Lions for 2021.

“It  helped our underclassmen tremendously to say the least. It gave them more time to understand our defensive and offensive schemes and helped give them time to learn everything,” White shared.

White was brought into Southeastern in 2019 from Northwestern Oklahoma State University and was tasked with turning the program around, a feat in which he accomplished in his second season by guiding the Lady Lions to their highest winning percentage in school history.

White guided the Lady Lions to an eight-game winning streak on the season, a feat which was also a school record.

“We were sound defensively and did a great job holding down opponents. We are not the most popping team offensively but defense is our main scheme,” White said.

As the number three seed in the Southland Conference Tournament Southeastern will face the winner between Central Arkansas University and Abilene Christian University, White shared what the team needs to do in order to win the tournament.

“We can’t come out flat as we did against Central Arkansas on Saturday. We need to do a good job of siding out the first ball because that will limit their chances of scoring,” White stated.

Tune into ESPN+ on April 1 to check out the Lady Lions in action as they will try to earn their first-ever tournament win in Corpus Christi, Texas.