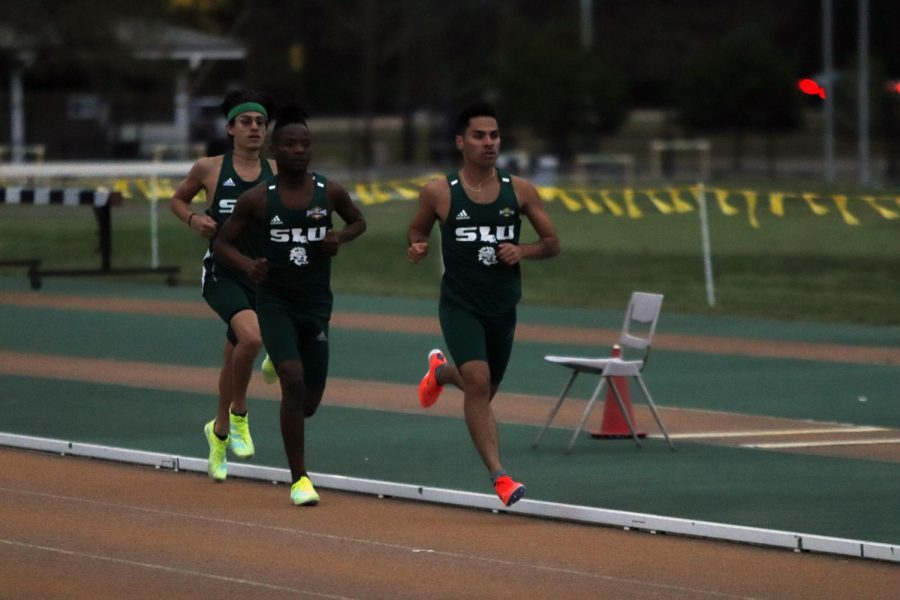 Over the weekend James Benson II and Jonathon Sawyer both broke university records in the 400 meter race. The Lions’ track and field sqaud will be back in action on April 1 in Gainesville, Fla.

During the week of March 22-29, the track and field squad continued to break records, with Jonathon Sawyer breaking the university record for the 400-meter race. The senior broke James Benson’s record, running a time of 45.35 which was set two days prior, as Benson set the record with a time of 46.05 in Austin, Texas on Thursday.

Track and field head coach Corey Mistretta talked about Sawyer and Benson’s performances over the weekend.

“It’s amazing how well Johnathon ran. That was his third 400 of the weekend, so for him to put that kind of performance together this early in the season is remarkable. And James was fantastic as well coming back and repeating his performance from Thursday, so it’s exciting to see what our 400 guys can do as the season,” he said.

The indoor women’s volleyball team secured the No. 3 seed in the Southland Conference Tournament over the weekend and finished with an 11-4 overall record in the shortened 2021 season. The Lady Lions’ next matchup will be on Thursday, April 1 against sixth-seeded Central Arkansas University or the seventh seed Abilene Christian.

Along with the successes of the track and field team, Lions baseball got back to their winning ways as they swept Southland foe Lamar University in a four-game series.

After dropping their second Southland series to Incarnate Word University, the Lions improved to 16-8 in the 2021 season.

As of March 30, the Lions are sitting at the top of the Southland Conference and will have an eight-game homestand versus McNeese State and Abilene Christian University.

After a 14-day break, the Lady Lions soccer team was back in action, facing off against Incarnate Word and Abilene Christian on the road in Texas. Both matches resulted in a 0-0 tie as the Lady Lions continued their unbeaten streak to five matches.

The Lady Lions’ next matchup will be at home against Houston Baptist University on April Fool’s Day, in which the Lady Lions hope to earn their fourth win of the season.

Along with the baseball team, the Lady Lions softball team knocked off Southland rival Abilene Christian in a three-game series at home in North Oak Park.

Like clockwork, junior infielder Lindsey Rizzo led the Lady Lions with a pair of RBI’s in the final matchup against the Wildcats. As of March 30, Rizzo’s batting average sits high at .402 with seven RBI’s and 37 hits.

Pitcher Heather Zumo pitched a complete-game one-hitter in the series finale on Saturday as the Lady Lions pushed to 17-13 on the season. Zumo currently holds a 2.12 earned run average with 89 strikeouts and a 10-2 record.

After dropping a road game to Incarnate Word University in San Antonio, the Lions football team had a bye week as they prepare for their next game at home against Lamar University.

At 2-2, the Lions merely made the FCS Stats Top 25 squeaking in at No.  23 before their matchup against the Cardinals. Lamar is coming off of a 31-23 victory over Northwestern State University and will look to spoil the Lions spring playoff hopes.

Senior transfer quarterback Cole Kelley currently sits at fifth in the nation with a total of 1,532 passing yards in Frank Scelfo’s air raid style of offense.