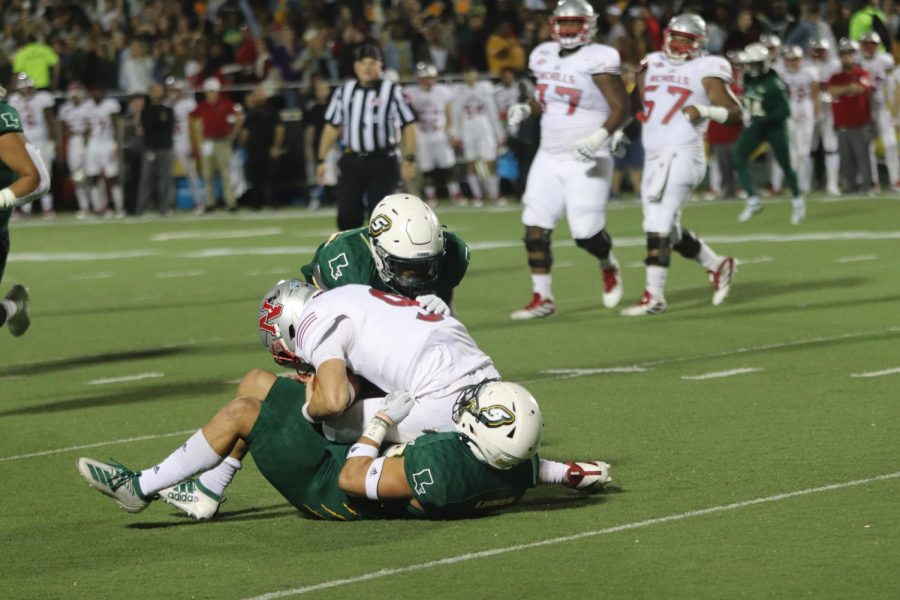 Linebackers Alexis Ramos and Joshua Carr sack Nicholls State quarterback Chase Fourcade. Ramos was ejected in the third quarter due to a targeting penalty in the 2019 loss against the Colonels.

Southeastern Louisiana University and Nicholls State University is one of south Louisiana’s most colorful rivalries. The two schools, situated between Baton Rouge and New Orleans compete for students, athletes and notoriety.

The River Bell Classic will have a springtime flair due to the pandemic this season. The fall 2020 football season was postponed and moved to the spring of 2021. Hostilities will commence Saturday at John L. Guidry Stadium in Thibodaux. If it’s anything like the last match-up, fans will be in for a Southland treat.

The Lions and Colonels staged quite the spectacle on that November night in 2019, a Southland Conference title and an automatic bid to the FCS playoffs were on the line. It was a back-and-forth affair with both teams claiming and losing the lead. The pivotal moment came late in the fourth quarter when the Lions fumbled on Nicholls’s two-yard line and turned the ball over, Nicholls prevailed 28-27.

“The ramification of the game is still going to be huge. Anytime you develop a rivalry with another university it’s something special,” said SLU head football coach, Frank Scelfo. “It’s a culmination of our entire season.”

The roots of this rivalry stem back to the late 1960s when Nicholls started their football program. Southeastern had been playing football for almost 40 years by then, however, due to changes in conference affiliation a new series was birthed. Louisiana Tech and Southwest Louisiana (now known as Louisiana-Lafayette) were off the Lions’ schedule. So, the Lions looked across Louisiana at the budding program in Thibodaux and a natural rivalry with the Colonels was born.

The new rivalry game needed a trophy, thus Sigma Tau Gamma, a Southeastern fraternity, provided a ship’s bell on a cypress wood base. The trophy was coined, The River Bell Classic, in reference to the mighty Mississippi River which separates the two regions.

The first game was played in 1972 in Hammond at Strawberry Stadium. The Louisiana Super Dome in New Orleans hosted three games during the 1970s adding a special aura to the contests.

Series play continued into the 1980s, but then Southeastern discontinued its football program after the 1985 campaign and a nineteen-year hiatus ensued. 2003 marked the return of SLU football and two seasons later the clash reignited.

Over the years there have been many highlights. Long-time Southeastern Sports Information Director, Larry Hymel, now retired, takes us back with his recollection of some of the rivalry’s best moments.

“There were a lot of games, especially the two, Southland Conference, championship years of 2013 and 2014 when we dominated Nicholls. Last year’s loss hurt as a fumble at the goal line prevented a win and conference title,” Hymel said.

At stake in this season’s River Bell Rivalry will be an at-large bid into the 2021 FCS Playoffs as both teams head into week 7 with 2 losses to their regular-season record.

The Lions are currently averaging 35.4 points per contest along with a sixth-ranked offense in all of the FCS and coming off of a 42-12 victory over Lamar.

Nicholls leads the closely contested series with 15 wins to Southeastern’s 14. The Lions have a chance to pull even with a victory at the April 10 matchup down on the bayou. Alumni and student bodies alike of both schools are looking forward to the Spring 2021 River Bell Classic.