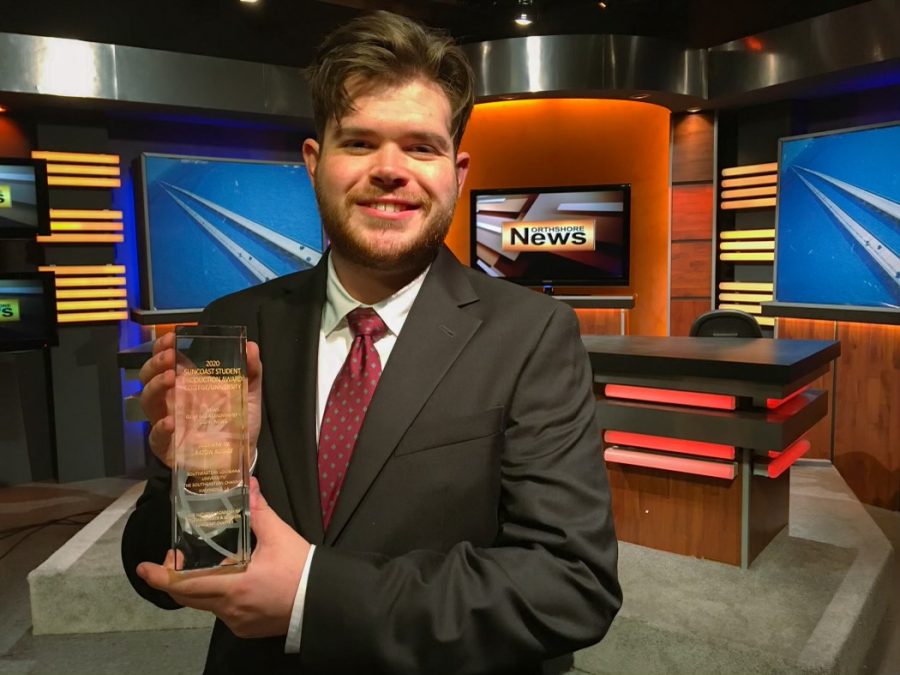 Spring 2020 graduate John Sartori and Spring 2021 graduating senior John Williams received recognition for their work at the Southeastern Channel. The channel also received an award in the “Sports-Live Event” category for its student broadcast of Southeastern’s football game against Incarnate Word on Oct. 12, 2019.

Sartori won in the “Talent” category for his demo reel submission, a composite of his on-camera anchoring and reporting work at the Southeastern Channel, for the second year in a row. Sartori said after receiving his first Emmy in his junior year, he worked to improve in his craft.

“That means the world to me because not everybody can say that. It was a great feeling but it was also bittersweet because it was the end of one of the great times of my life which was working at the Southeastern Channel and being at Southeastern,” Sartori said.

Williams won in the “News: General Assignment: Light News” category for his feature story production “July Fourth in Baton Rouge,” which he produced in the summer of 2019. He said his initial reaction to receiving an award in the news category was shock because his personal interest lies in the creative side of video production.

He said, “I went into it with very little preparation, which is not generally recommended, but I think that actually helped me because I was able to be creative instead of having to follow a script or anything like that. When I was there, I was able to shoot whatever I wanted to shoot and be creative on the spot.”

Sartori is currently a sports reporter for KTAL NBC Channel 6 in Shreveport, a television station that broadcasts to Louisiana, Texas and Arkansas. He described how his position as a student-worker at the Southeastern Channel prepared him for the workforce.

“I’ve said it so many times — there is not a better program in the region than the Southeastern Channel because of the experience you get, the real-world application that it provides. As soon as I got to Shreveport, I was able to go right in and all I needed to do really was learn how to do it their way,” he said.

Both communication alums helped the channel reach its recognition for the live broadcast of the Lions’ football game against Incarnate Word, with Williams as an end zone camera operator and Sartori as a play-by-play announcer.

Sartori said, “It was something we had heard about for years and it finally happened that last year, and it was either the second or third thing we did for ESPN+. It was so cool.”

Williams described post-production meetings held by Southeastern Channel General Manager Rick Settoon as some of his best memories during his time there over the past four years.

“I’ll never forget these meetings because he’ll go around the room and recognize each individual, what they did, how they helped the production, that sort of thing. He always finds something positive to say about everyone,” he said.

Williams encouraged students interested in joining the Southeastern Channel’s team to take the opportunities offered to them and show passion for what they want to do.

“Whenever you’re first starting out, it may seem like you’re not a priority but just know that you are, and you’re going to be presented opportunities, and I would say take as many of those opportunities as you can, and show work ethic,” Williams said.

Williams and Sartori credited the Southeastern Channel with many of the educational experiences and networking opportunities that gave them a leg up in the communication industry.