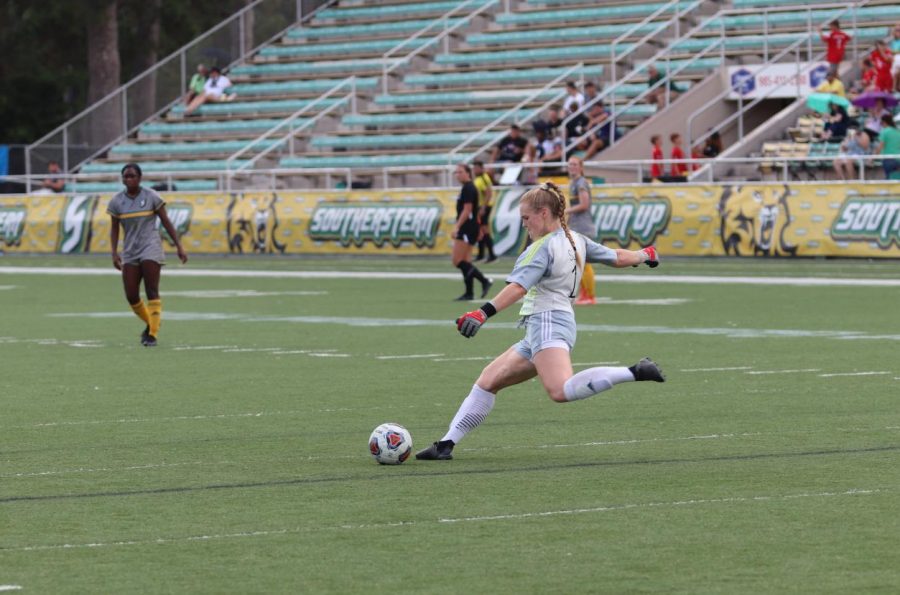 Goal Keeper Nadine Maher passes the ball back in play in the Lady Lions 2-1 March 7 victory over Stephen F. Austin University. The Lady Lions will take on Rutgers University in the first round of the NCAA DI Women’s Soccer Tournament on Tuesday April 27.

On Saturday, April 17, the Lady Lions soccer team made history as they earned the program’s fourth Southland Conference Title, its first since 2015.

The Lady Lions drew the fifth seed in the tournament after finishing the regular season with a 6-2-3 record.

Christopher McBride, soccer head coach, shared the wave of emotions that ran through him as the Lady Lions were crowned champions of the Southland.

“It was surreal in all honesty. I was so happy and proud of our girls and what they overcame this season. After being predicted to finish 11th in the Southland this season we proved our doubters wrong,” McBride said.

The Scotland native explained when he knew this year’s team could win it all.

“It was during the middle of the season after we played both Incarnate Word and Abilene Christian on the road. Both games ended in a 0-0 tie and the girls were extremely disappointed and felt defeated. To be disappointed and feel defeated after tying two tough road games says a lot about a team,” McBride said.

McBride noted that both senior midfielders Gordon and Lexie Gundersen were leaders this season.

“Our captains really stepped it up this season. Lexie Gundersen and Megan Gordon both did an amazing job this season,” McBride said.

On April 27, Southeastern will face Rutgers University in the first round of the NCAA DI Women’s Soccer Tournament in Buies Creek, N.C. McBride said he anticipates many challenges when facing the Scarlet Knights.

“Anytime you face a team in a big-time conference like the Big 10 there will be many challenges. They defeated Penn State earlier this season and Penn State won the Big 10 title. So we are going to start watching film first thing Tuesday and get at it,” McBride said.