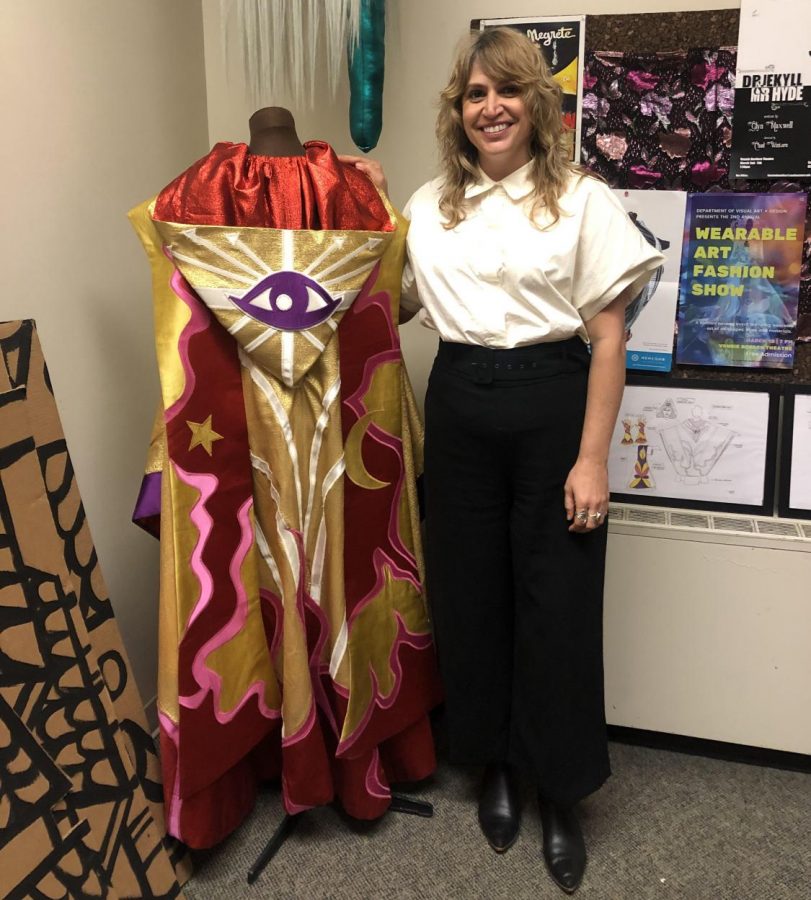 Christine Crook, assistant professor of costume design and make-up technology, shows off a costume she made in back 2019.

For the first time since 2017, the theatre department is welcoming back their costume design class for Fall 2021.

The class will be taught by new full-time instructor Christine Crook, a California native with nearly two decades of experience in the field. Crook, along with the theatre department, is seeking to offer the returning course once an academic year instead of every two to three years.

She said she is excited to bring her own approach on the costume design process to the course.

She said, “What I feel is unique about the way I teach is that I would love to see a student leave the course with an understanding of the costume design process that would make them qualified for an entry-level position with a theatre or performing arts organization or even on a film crew.”

Her training of students will consist of script analysis, character analysis and breaking down said character into different costume looks with sketching, drawing and rendering. Students will learn how to sew by stitching and using sewing machines.

Students will also learn how to work with a budget and to be quick and resourceful with their process. According to Crook, when working in a dramatic production of any kind, one has to complete tasks quickly and turn nothing into something.

Originally based in the San Francisco Bay Area, Crook has primarily worked in theatre, opera and dance as a costume designer. She has traveled across the nation helping with shows and has taught at a few universities before moving to New Orleans to work her full-time position at Southeastern.

Crook said she hopes students will walk out of her class with a basic understanding of costume design and mentioned that these skills would qualify them for an entry-level position at any dramatic production.

“These types of jobs are really for someone in their 20s, with limited experience, and all they need to know is usually how to sew and understanding the basic level of costume design, so I think an intro to costume design class will qualify many students for that type of entry-level position and to hopefully recruit these students to become further involved in our theatre department productions here at Southeastern,” Crook said.

Crook also has a costume shop in the department in which she hires student workers and volunteers who assist with the theatre department’s productions. Students can also earn credit hours from the theatre lab for participating in the costume shop, whether in a design capacity or sewing and technical capacity, according to Crook.

Mina Perkins, a junior art major, worked in the costume shop before hearing about the new class from Crook. She said she is excited to have the opportunity to take a class that will not only further her education but will also be enjoyable.

“Christine has been a great teacher as well as a boss. As a work-study, my job is not only to assist in the shop but also to be trained in costume design. Christine allows me the space to work on projects even though I’m not the quickest yet, which has really helped me develop my sewing skills,” Perkins said.

Registration for the costume design class is still available for the Fall 2021 semester. Students who are interested can speak to their advisor for more information.