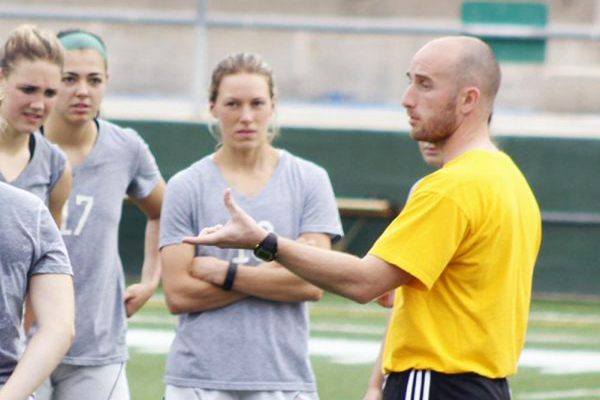 Christopher McBride, pictured on the right, interacting with his players during practice, in his first season at Southeastern. The Lady Lions won the Southland Conference Tournament this year prompting McBride receiving the Coach of the Year award. Southeastern will take on Rutgers on April 27.

As a young boy, Christopher McBride grew up playing soccer in the neighborhoods and fields of his native country, Scotland.

His father was a youth coach that taught him the game. He had signed with a professional club and played until he was 16. At this point, he had a decision to make: enroll at university or continue a soccer career overseas. He chose the Scottish Highland to America.

McBride won two conference titles along with numerous academic awards while playing at Martin Methodist College in Tennessee, which ultimately led to a career in coaching.

“Initially, it was because in Scotland we don’t have the chance to go to college and play soccer like a professional sport. So, once you finish high school you have to do one or the other,” McBride said.

He said he did not want to give up on soccer, so following the example of some teammates, McBride’s focus shifted to a new destination.

“I could coincide my degree with coaching. They say America is the land of opportunity. Well, it was for me,” McBride said.

McBride landed an assistant coaching position at the University of North Alabama after his playing days were over. He specialized in goalie play and helped the team to a conference title along with a postseason berth. After a one-year stint with South Alabama as the top assistant, Southeastern came calling.

In 2016, McBride was the new coach in town for the Lions. Now in his fourth season, he was named Southland Women’s Soccer Coach of the Year after capturing the conference tournament. The Lions currently hold an overall record of 8-2-4, 6-2-3 in SLC play. He gave the credit to his players.

“It’s really not a testament to the work that I’ve done, it’s the work that the players have done. They are the ones willing to put in the time and effort by changing their habits to sacrifice and develop themselves. Now we put a plan in place, but without the players buying into it and executing, it’s never going to be successful,” McBride said.

“Since day one, coach had a plan on where this team was headed. As a collective, he’s got the girls to trust in him and each other to be successful,” Gordon said, adding, “It’s just how much he puts into us… I mean I don’t know anyone who works as hard as he does.”

Members of the team shared a funny story of McBride from a training session. According to the players, McBride jumped into a drill involving 40-yard sprints without warming up and slipped and fell on his back.

Dalton Fish, a junior midfielder from Pflugerville, Texas, said McBride is dedicated to the team and has made the season enjoyable.

“Every day is something different and he really thinks out practices and game plans. He puts a lot of time and effort into making this team successful,” Fish noted.

The Lady Lions soccer team plans on continuing their success as they travel to North Carolina for a date with Rutgers of the Big Ten in the NCAA tournament on April 27.