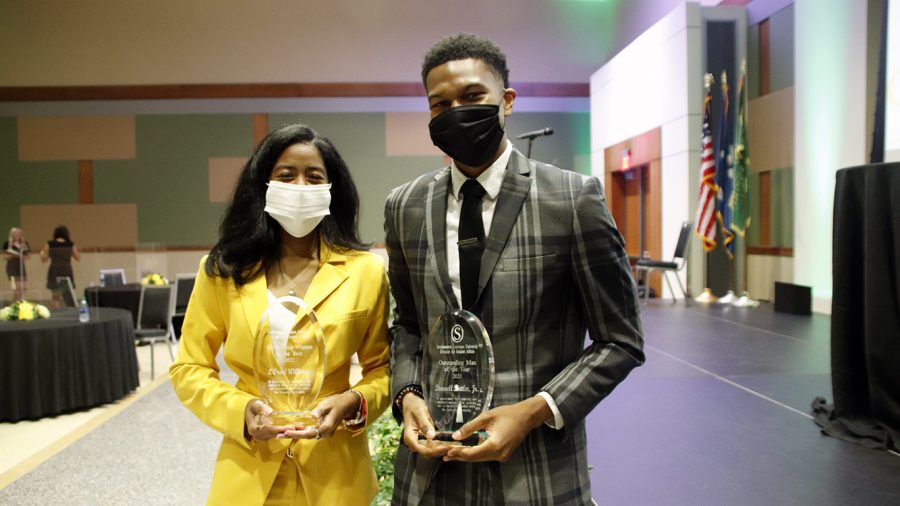 L'Oreal Williams and Darnell Butler Jr. were awarded the 2021 Outstanding Woman and Man of the Year awards at the 40th annual DSA Student Awards Convocation.

In 40 years, the university has not missed an opportunity to honor and celebrate its students at the Division for Student Affairs Awards Convocation.

On April 27, the DSA Convocation awarded many students of all talents. Multiple awards such as Freshman of the Year and Rising Sophomore were given.

Vice President for Student Affairs Dr. Eric Summers explained why he believes the convocation is important, as it acknowledges the work of students on campus. Convocation is especially vital during this unique academic year, according to Summers.

“Even in the midst of COVID, they have remained dedicated to giving back to the university. It wouldn’t be right for us to not acknowledge that. Many people have decided to forfeit last year and this year, but these students have stepped up, they brought the light to our campus and they continue to serve,” Summers said.

Outstanding Woman of the Year award winner and SGA President L’Oreal Williams shared her thoughts on receiving the recognition.

She said, “I wasn’t expecting it. I don’t know what I was expecting, but that wasn’t it. I was just like, ‘Wow.’ It’s really an honor to be recognized as Woman of the Year.”

She also shared a few details about her time as a student at the university.

“Southeastern has really grown to be my home away from home. I never thought I’d go to college and feel like this, and that it’d be such a great experience. Everybody’s been so welcoming and everyone’s like a second family. Everywhere I go, I know someone has my back because we’re a family here,” Williams said.

Outstanding Man of the Year Darnell Butler Jr. expressed his excitement over the award.

He said, “It feels so surreal. I didn’t even expect a video. It was so amazing. It just shows how people really recognized my leadership, and they paid attention and really appreciated what I’ve done. I look up to people like Dr. Gabe and Ms. Brendan and all of our advisors. They taught me so much and made me want to work harder on behalf of the students.”

Butler said his time at the university has allowed him to break out of his shell and get involved.

“I’ve been here for four years, and I saw a lot of things during my time here just by being involved. My biggest thing, while I was here, was to take advantage of my opportunities and my time. That’s why I always wanted to get involved. Coming from high school, I was just an athlete. I never really saw myself being involved in organizations, so when I came to Southeastern, I wanted to take that extra step and do something new. Doing things I’m not used to made me a better person in the end,” Butler said.