On-air or online: The future of KSLU radio 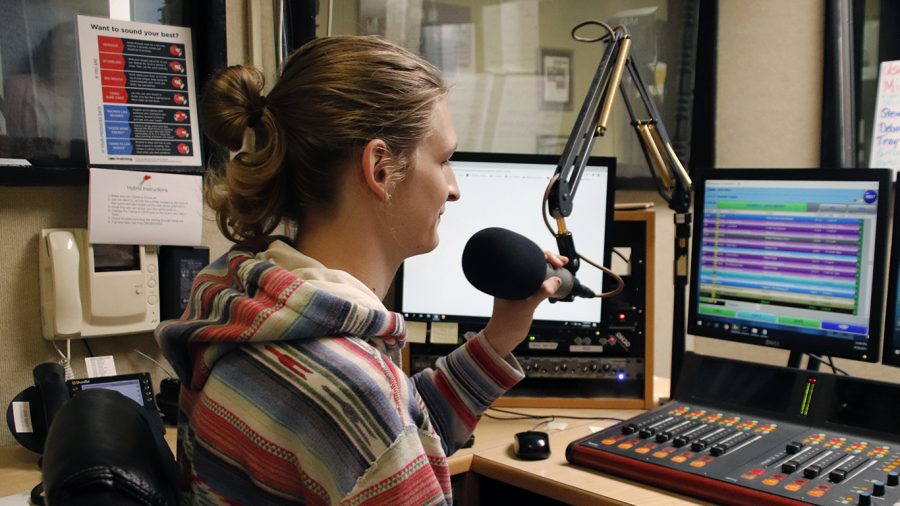 Troy Granger, a sophomore communication major, is a student worker at the KSLU radio station. With renovations scheduled for D Vickers Hall, questions have arisen regarding the future of KSLU’s radio operations.

While the renovations of D Vickers Hall have posed a promising future for the Department of Communication and Media Studies, the transition period has left many programs in a stage of limbo.

KSLU, Southeastern’s FM radio station, is among the entities that will be directly impacted by D Vickers’ renovations. With the construction period ahead, the department must now consider how to handle the satellite and terrestrial equipment needed to keep the station on air.

Department Head Dr. James O’Connor said there are three main possibilities for KSLU during and after construction.

“They can either build around it, move it or transition to internet radio. Maintaining it while construction is going on–it could be anywhere from $25-80,000. When you’re talking about a 20 million dollar building, that’s really not that big. But, that’s not the major consideration. The major consideration is the logistics of doing it. Is this a viable way of doing it,” O’Connor said.

In order to continue terrestrial radio operations, KSLU must also maintain its Federal Communications Commissions licensing. O’Connor said the likelihood of maintaining the license during construction is another area of consideration.

“They would have to maintain operations. What we could also do is request permission from the FCC to power down during the transition phase, but we’re not sure how long construction would take. There are limits on how long you could do it,” O’Connor said.

Keeping student listenership in mind, O’Connor noted the transition to an online format could be a viable option.

He said, “It’s being looked at. The idea is that communication is moving digitally to internet delivery. The question would be ‘Can you build an audience with an internet radio station?,’ and there’s a lot of college stations that have gone that direction. So, that is also an option. Terrestrial radio is a medium that’s on the wane right now, and that’s something people have to look at.”

O’Connor said there are both pros and cons to KSLU operating entirely online.

“The pro of online formatting is that you don’t have the expense of operation; it’s a significantly lower expense. But, the con of going online is that some people feel traditional radio is essential to the community and to the university because it’s been around for years now,” O’Connor said.

Dr. Amber Narro, communication and media studies professor, is among those using radio to connect with the community.

As the host of the KSLU community interest show Point of View, Narro said she believes terrestrial and internet radio can continue to coexist at the university.

“I think there is room for both. We would be irresponsible if we didn’t try to enter the world of streaming, and obviously I support that because I’m helping students learn about it right now. But, there is plenty of information that supports that radio is still relevant,” Narro said.

“I found that when it comes to just listening to music, streaming is winning; however, we still like the radio for information. The radio is important in times of emergency, and it’s important to the community. Training students to provide good information while training them to use the equipment is important. That’s what we do at KSLU,” Narro added.

Although she is not prepared to let the radio go, Narro iterated she will continue to support her students regardless.

She said, “It would break my heart if KSLU left the radio dial. I would be very sad about that, but I will support whatever we need to do for students’ progress. I will always operate in whatever decisions are made and do what is best for Southeastern, but I think there are a lot of reasons we should keep the radio at this time.”