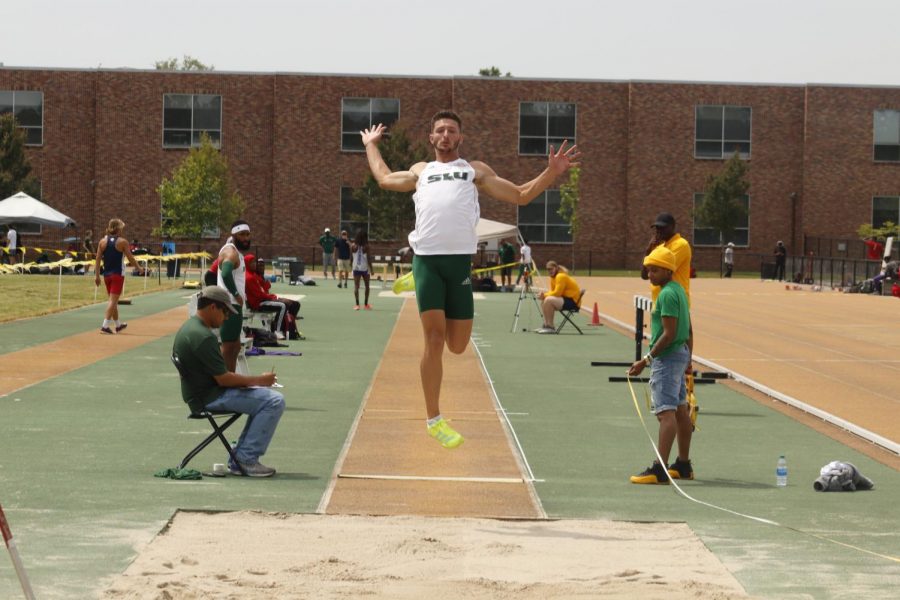 Sophomore Damon Herod leaps off the board at the long jump event during May 1's pre-conference track and field meet.

The Lions hosted the event on campus at the Southeastern Track Complex April 30 and May 1. Teams from four states participated, including Southeastern, Louisiana-Lafayette, Nicholls State, Abilene Christian (Texas), Central Arkansas and South Alabama.

The competition served as preparation for the upcoming championships. Each school was represented well by its fanbases.

“We are extremely proud of both the men’s and women’s teams. Their consistent work throughout the year has positioned themselves to do well in a couple of weeks at the conference championships. They continue to inspire and make us proud for the way they approach their craft,” said track and field head coach Corey Mistretta.

Mistretta is a 30-year coaching veteran who hasn’t been a stranger to success, winning numerous titles from the high school level up to the collegiate ranks. Most recently with Southeastern, he won the 2020 men’s indoor Southland Conference Tournament catapulting him to coach of the year status.

At this past weekend’s tuneup meet, the Lions put on a show. In a season of overcoming, the record books were rewritten.

In the javelin events, Charlotte Wissing threw 160 feet, 0.5 inches (48.78m) breaking the women’s school record and putting her at the top of the Southland Conference for 2021. Franck DiSanza threw 248 feet, 8.25 inches (75.80m) to break the men’s facility record. The throw was fifth in the nation and the best in the Southland conference since 2017.

In the men’s 4×100, D.J. Ruffin, Donovan Storr, James Benson II and Johnathon Sawyer posted the top time in school history since 2000 with a time of 40.02 seconds. This bested Sam Houston’s facility record from the 2015 Southland Outdoor Championships.

The Lion’s men and women teams showed out, which was well received by the coaching staff who said they were pleased with the performance. It didn’t come as a surprise to them, as they said they felt confident the players were primed for success.

Coach Mistretta said, “When we recruit athletes to Southeastern, we promise their parents we will do everything we can to help them to become not only better athletes but better citizens as well. We take this promise very seriously, so my final words would be for them to go forth with the same determination they approached their track career and be a positive influence in their life away from track.”

SLU will recharge before heading to the Southland Outdoor Championships which will take place in Houston May 14-16.