The Lion's Roar • May 5, 2021 • https://lionsroarnews.com/25960/dark-skinned-pavement-shines-light-on-police-brutality/arts-entertainment/ 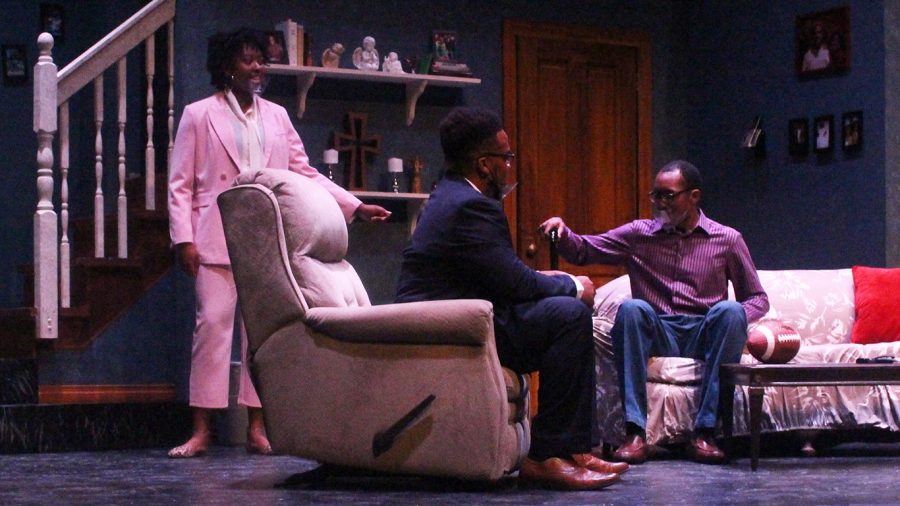 “Dark Skinned Pavement,” which was presented at the Vonnie Borden Theatre April 27-30, provides insight into the lives of a Black American family who lost their son to police brutality. Written by TJ Young, the play features an all-Black cast.

The play premiered from April 27-30 at 7:30 p.m. Written by TJ Young, the winner of the Inkslinger Playwriting Competition, the play highlights the grievances of a Black American family who lost their son to police brutality.

Faculty member and director Anne-Liese Fox works for the theatre department and was pleased with the topic and attention that the play drew in on campus.

“I just felt it really spoke to the times because we have been having a lot of incidents lately that deserve to be talked about, and his play really brought that out. It was so well written,” said Fox.

At the performance on April 28, Fox invited the University Counseling Center and Justice 4 All, a campus organization that advocates for citizens regarding these types of issues in society.

The panel of UCC workers sat in front of the stage next to two Justice 4 All members and explained how a person could cope with the feelings of fear and mourning.

They encouraged people to stay aware of how they are feeling and to seek help as soon as they can.

Sophomore management major Isaiah Smith played the character of Martell, the deceased son who was shot by police.

Smith shared how he felt trying to embody the character, saying he was, “Excited, but mainly nervous because I wanted to be a symbol that represents Martell because he is the representative of the people the police tend to kill. I even did research on multiple incidents.”

Smith said he believes the play needed to be shown and thought it was an honor to be a part of such a movement.

“The main thing that popped out to me was the Black cast and the police brutality, and that was a big thing that’s in society and it just resonates with me. I also wanted to portray that type of character because it looked like a very important challenge that I believed would really help me as an actor,” he said.

Janai Stevens, a freshman English major, played the role of Shay, a cousin of Martell’s parents.

Stevens agreed with Smith on how important the story seemed. She also felt it resonated with the audience and what society has been going through which is why she was excited to audition for the part.

Stevens said, “I had honestly looked at the flyer and looked up what it was about and seen a little synopsis and bio. It just was such a very powerful story and resonates so well with all of us today. I wanted to be a part of something that was this big and this important.”