An evening of student-directed scenes 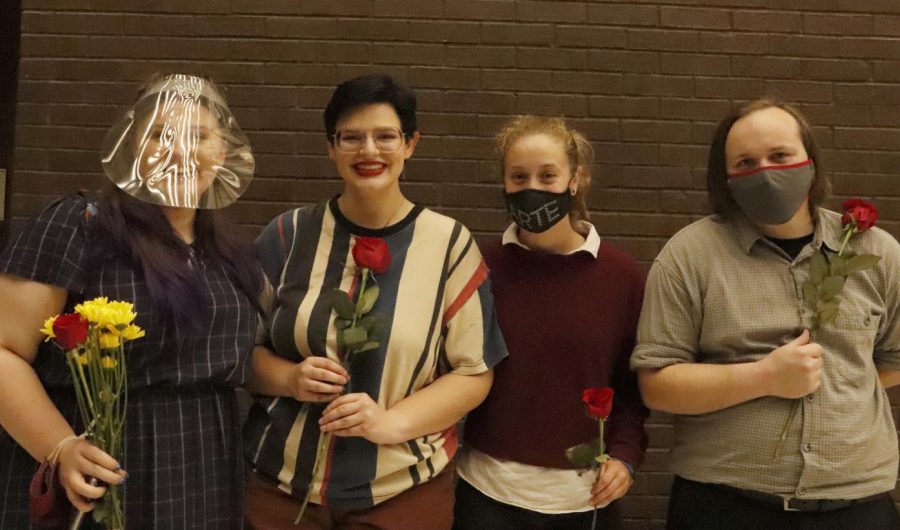 The cast from senior biology major and theater minor Carla Cortina’s scene, ‘The Children’s Hour’ hold their flowers with satisfaction. Southeastern students in Chad Winters’ directing class each directed their own scenes and hosted a showcase together.

On Thursday, May 6, students and families gathered in the Vonnie Borden Theatre to watch a showcase of student-directed scenes.

For Chad Winters’ theatre directing class, he had each of his students take up the role of director for the semester and direct a scene of their choosing.

Each student was responsible for holding auditions, designing the set, sound design and many other aspects that come with being a director. The people who auditioned ranged from Southeastern students to seniors from nearby high schools.

There were 12 scenes for the night, most of them originating from plays as well as the finale musical scene from the film “Little Shop of Horrors.” These scenes ranged from belly-busting laughter to tear-jerking dramatics.

Sophomore communication major Carsyn Avegno had her mind set on directing a scene from “Little Shop of Horrors” to incorporate a musical flare to the showcase. She discussed some of the challenges directors face that audience members may not think about.

“I think the most challenging part of this was not only directing but producing a show by yourself. I did a cut from ‘Little Shop of Horrors,’ so I did choreography, sound design, set design and every other aspect that you normally would have a team working on,” Avegno said.

Despite facing challenges, Avegno said she enjoyed seeing everything come together on the night of the showcase and would like to direct again if given the opportunity.

Another director involved in the showcase was senior education major DeJuan “DJ” James.

While James has had experience with directing before, the assignment still did not come without its challenges.

“The scene I chose was very simple in scale but bold in story, so I knew the biggest obstacle would be finding two strong actresses who could tell that story. Thankfully, I did,” James shared when discussing his scene ‘Where Was I?’ by John Cariani.

While it was very different for the students taking up the role of director, other students had to figure out what it was like to work under the direction of peers.

Sophomore middle school education major Shelby Grantham noted that one of the tougher aspects of being a part of the showcase was learning lines for senior biology major and theatre minor Carla Cortina’s scene, ‘The Children’s Hour,’ while also stage managing another production.

When it came to working under another student, Grantham did not have too many concerns. Grantham said, “It was great getting to act for a fellow student and friend because we already knew each other and worked together without any awkwardness at the beginning.”

Though there are no more plays lined up for Southeastern due to the end of the semester, the next season will be announced at their annual Vonnie’s Awards. All of the plays planned out for the fall and spring semester will be announced to the attendees on May 16.