The Lion's Roar • May 13, 2021 • https://lionsroarnews.com/26047/the-department-of-music-and-performing-arts-holds-auditions-for-the-musical-ragtime/arts-entertainment/ 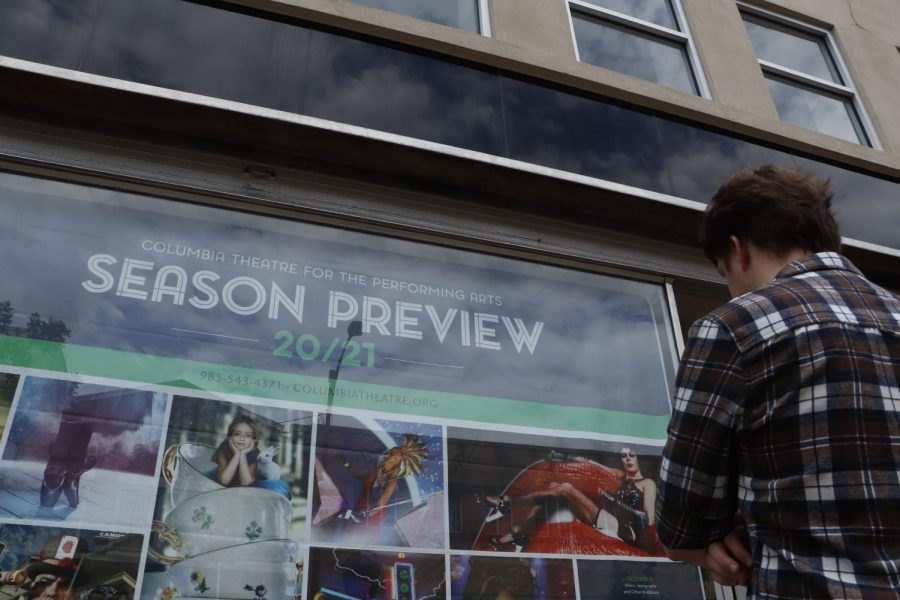 Sophomore psychology major and student actor Landon Scholle checks out the Columbia Theatre’s 2020-2021 season poster in the window of the building. The Columbia will be hosting Southeastern's 'Ragtime' musical performances scheduled for September.

Southeastern’s Department of Music and Performing Arts will be holding auditions for the musical “Ragtime” in June.

Although the campus may be returning to normal, the department has made changes to the auditioning process for the musical.

The auditions will last until June 16 and must be submitted via video. Students auditioning are asked to sing around 32 measures or 60 to 90 seconds of a song, showcasing their vocal abilities.

“They need to put their best foot forward. They’re only going to sing about a minute or 90 seconds of a song; they need to examine the song and figure out what 90 seconds are going to show off my voice the best. It doesn’t matter if they like the verse if the chorus is where all the business is happening,” said Charles Effler, the director of the Opera and Music Theatre Workshop and producer of “Ragtime.”

Although the auditions are mainly being advertised to music majors, students of all majors are invited to audition regardless of whether they have had experience with musicals.

Students are allowed to perform songs from musicals other than “Ragtime” in their auditions. Similarly, they can sing with a recorded track, a piano or no accompaniment at all.

Aside from the auditions, members of the department found the production particularly necessary during such a volatile social climate.

“Ragtime,” a Broadway musical by Terrence McNally, centers around three minority families’ attempts at achieving the American dream in New York in the early 20th century. Working through poverty, as well as social adversity, the three families discover the connections they share.

“Ragtime” opened on Broadway in 1996 and garnered major acclaim from audiences. It was also nominated for 13 Tony Awards, winning “Best Original Score” and “Best Book of a Musical,” among others.

“The show educates the audience not just by making reference to the racism and the anti-immigration and the income inequality, but forcing them to hear it, putting it in their face so they feel offended just as the people who are getting called those names would feel offended,” Effler said.

For Effler, a musical such as “Ragtime” is crucial during this period of great social division, as it exposes the audience to varying perspectives of reality for others.

“It’s not to make people uncomfortable, except in a learning way,” he said.

He also noted the department’s production of “Cabaret” in 2019 was a commentary on fascism and its presence in politics at the time.

With the musical coming to theatres next fall, members of the music department are hoping for normal rehearsals.

The musical will be at the Columbia Theatre on Sept. 23 and 24.