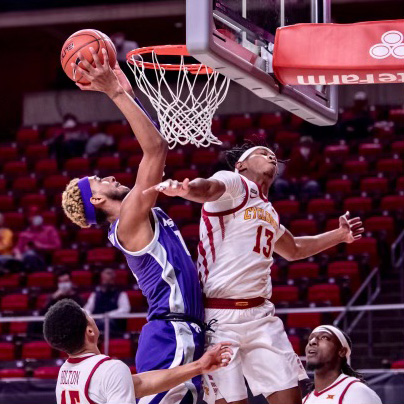 As a Kansas State Wildcat, center Antonio Gordon goes for a shot against the Iowa State Cyclones. A native of Lawton, Okla., Gordon signed on for Southeastern's men's basketball team for next season.

Antonio Gordon’s basketball journey has landed him at the Lion’s Den.

A native of Lawton, Okla., Gordon initially committed to Tulsa University but wound up playing for the Wildcats of Kansas State. Next season, he will wear the green and gold of Southeastern.

The former three-star prospect is a 6’9” forward who prepped at Eisenhower High School in Houston. As a college sophomore this past season, Gordon led his team in rebounding during conference play while appearing in 21 games and making 12 starts.

Against national champion Baylor, he scored a career-high of 23 points. Gordon also performed against Oklahoma State’s Cade Cunningham, recording a double-double with 15 points and 14 boards.

“I feel like big games always give me a boost of confidence, but I try not to let it get to my head and affect my next game. Playing in the Big 12 has helped my game to grow a lot because you are playing against the top players and teams in the country night in and night out,” Gordon said.

The transfer portal has become a way for programs to find players. It also offers collegiate athletes the opportunity of a fresh start.

“I ended up choosing Southeastern because it was the perfect fit for me as a player. Not only that, the coaching staff would call me every day and I developed a great relationship with them,” Gordon said.

In his own words, Gordon had this to say about his game: “What Southeastern is getting in a player like me is a versatile athletic forward who crashes the glass and can score the ball.”

Head basketball coach David Kiefer reiterated this statement, adding that his latest addition to the squad is “skilled around the basket and is more than capable of being a shot-maker.”

Kiefer says he looks forward to Gordon’s addition to the team and his work on the court next season.

“Not only is he a gifted player, he is an outstanding person and really exemplifies the core values that we talk about in our program. I think he’ll bring toughness and a high-intensity motor. Antonio just wants to win and you can really see that when he is on the floor. It’s hard to fit in one response how much we know he’s going to bring to our program,” Kiefer said.

Kiefer said he expects his team to improve tremendously for this upcoming season.

“As things stand now, we should be able to have a full pre-season to prepare everybody for what it is that we take pride in which is toughness, defense and rebounding. Antonio brings all of those things to the floor day in and day out, so we feel that he fits perfectly with what we do,” Kiefer said.

As normalcy slowly returns, Gordon and his teammates will get to experience a packed house at University Center come fall.

Kiefer said, “We are extremely excited to be able to open the University Center back up to full capacity and have all of our tremendous and loyal fans be able to fully experience the amazing season we have coming up. The home crowds that we usually have definitely give our guys a boost when they are playing. We love each and every one of our fans and are always appreciative of all the support they give us.”

Gordon echoed his coach’s optimism for the upcoming campaign.

He said, “What I’m looking forward to this season is playing alongside my teammates and being the Southland Conference champions.”