The Lion's Roar • May 14, 2021 • https://lionsroarnews.com/26056/spanish-club-promotes-cultural-integration-during-isolated-times/on-campus/ 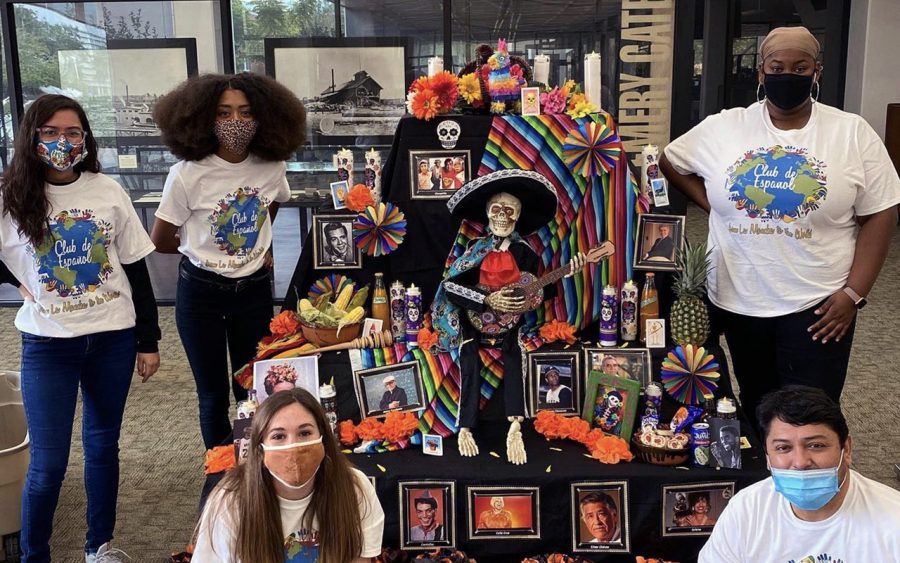 In honor of Day of the Dead, The Spanish Club stands by their handmade cultural display outside of the Sims Memorial Library in November of 2020.

The Spanish Club found ways to stay active during COVID-19 and is making plans to become further engaged for the fall 2021 semester.

The organization is dedicated to giving students and faculty the opportunity to take part in Latin and Hispanic culture. The club meets Wednesdays at 5 p.m. via Zoom and membership dues are $5 per semester or $15 per school year.

There have been a few meetings this semester along with an event named “Hit COVID Away Piñata Style” on March 19. For $1, participants had three tries to hit a piñata in the Student Union Annex. This was one of the many events hosted to raise money for the organization.

According to Interim PR Director Angie Jacobs, the past two semesters have been difficult for the club in regards to successfully executing events due to COVID-19. However, the leadership team is hoping next semester will see better change.

The Spanish Club already has a few plans on the agenda and with these intentions they are raising money for their trip to Puerto Rico, as well as encouraging involvement within the club.

“We have the Fall Pop-Up shop and are trying to put on Latin dance night again. Because of COVID, we couldn’t do that last fall. A lot of other stuff is in the works and we are trying to host, possibly, some type of Spanish game night or trivia night,” Jacobs said.

One of the greatest challenges facing the leadership team when adjusting to COVID-19 restrictions is lack of participation, according to Jacobs.

The trip to Puerto Rico is one out of many opportunities that the Spanish Club is trying to promote to the student population to increase efforts of participation. The club currently has around 20 members.

Alva Allen, a senior psychology major, decided to join the club to learn more about Hispanic culture and develop proficiency in Spanish in a passionate and fun environment.

“I am interested in Spanish because I have always wanted to learn another language, and Spanish is prevalent in many different parts of the U.S. and it is widely spoken. I am captivated by the art and grand history,” Allen said.

Jacobs reflected on how the Spanish Club helps the Southeastern community.

She said, “Our campus is filled with international students. We have the Nigerians, Nepalese and a lot of Spanish people on campus. So, with the Spanish Club, we are helping spread awareness of the culture and shining a light on the World Languages department and to give students the opportunity to embrace the Spanish culture.”