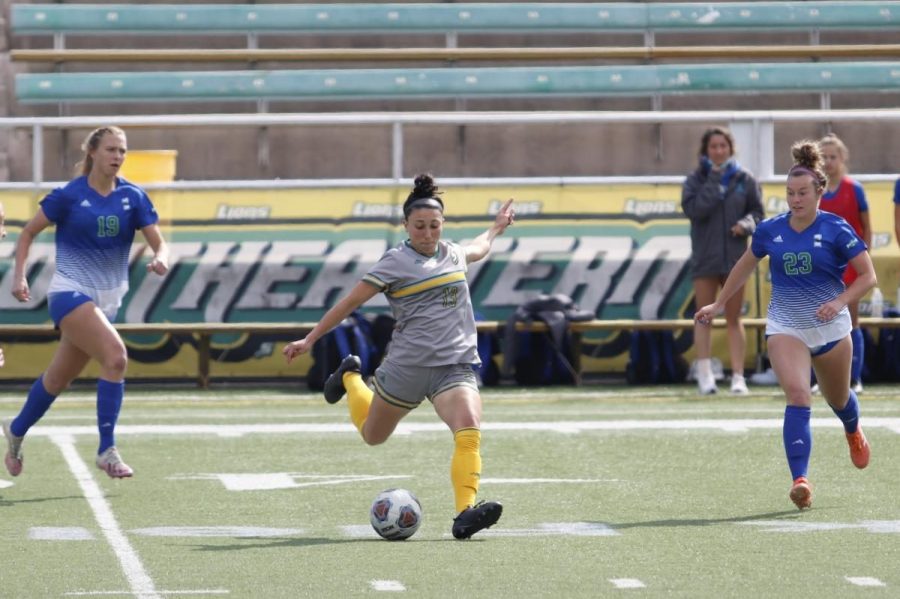 Midfielder Mya Guillory goes to kick the ball to another teammate in the April 3 game against Texas A&M Corpus Christi last season. The Lady Lions defeated the Islanders 3-1.

The outlook for Southeastern women’s soccer is a promising one for the 2021-22 season.

The Lady Lions are coming off a solid 8-3-4 campaign in which they won the Southland Conference Tournament along with making an NCAA tournament berth which was the school’s first since 2015. They were defeated by #22 ranked Rutgers 1-0 in the first round to end its season.

However, the Lady Lions look primed to do some damage this fall. With senior midfielder Megan Gordon leading the way, things are looking up.

Gordon is coming off a senior season in which she made First Team All-Southland and All-Region teams. She also was dubbed as Southeastern’s Female Athlete of the Year, becoming the eighth Lady Lion to receive the award.

Gordon is using her extra year of eligibility granted by the NCAA to all athletes from COVID-19. Her leadership and experience will be an asset to the team.

She proves this in the classroom by appearing on the Southland Conference Commissioner’s Honor Roll in all four years of her college career. Gordon also made First Team in Academics for the Southland this past year.

Gordon is not alone. The Lady Lions boast five players on the Southland Conference Preseason First Team. This is tied with Northwestern State for a conference high. Add three more players to the All-Conference second team and Southeastern has the most players in the Southland.

These players are no strangers to success as they racked up the awards this past season. All five preseason first-teamers were automatic selections as each made the All-Southland postseason team last year.

Junior forward Makenzie Maher was chosen as the Southland’s Newcomer of the Year in 2020. Jones, a sophomore defender, was Southland’s Freshman of the Year. Fish, a senior midfielder, is coming off an All-Southland first-team effort.

Senior goalkeeper Nadine Maher was the Southland Conference Tournament MVP with all three games resulting in a shutout. Yoder, a sophomore midfielder, rounds out the list of accolades for the Lady Lions as she made the All-Southland Tournament Team.

With the guidance of head coach Christopher McBride, the team looks to rack up multiple wins for the 2021 season.

The Scotland native and Southland Conference coach of the year, keen on discipline, led the pre-season conference favorites into the year in search of glory.

With the departures of Stephen F. Austin, Sam Houston, Central Arkansas, Lamar and Abilene Christian from the Southland Conference, Southeastern’s schedule will look a bit different.

As the COVID recovery continues, teams are returning to non-conference action. The team has already started this slate with tough losses on the road to Grand Canyon and Arizona State.

The home opener will take place this Friday, Aug. 27 at 7 p.m. in Strawberry Stadium against Alcorn State.