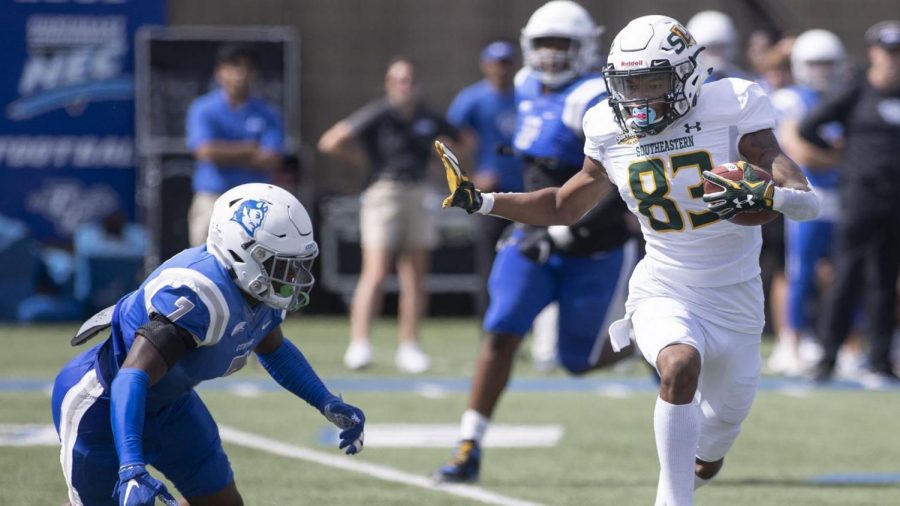 Junior wide receiver CJ Turner runs the ball down the field past an opponent during the football game against Central Connecticut State University on Sept. 18. The Lions defeated the Blue Devils in a 56-10 victory. Turner finished the game with five catches, 119 yards and two touchdowns.

The last month has been unique to say the least for Southeastern sports as Hurricane Ida disrupted any attempt to start fall sports off on the right foot. With the hurricane making landfall on Aug. 29, the university’s home football opener had to be moved to Florence, Ala., and many other sports teams had to adapt to the road life.

Despite all the chaos and confusion, the Lions still managed to escape with a 2-1 record before starting Southland Conference play this Saturday against McNeese State University. The Lions’ latest victory came on the road with a 56-10 blowout against Central Connecticut State University.

Senior quarterback Cole Kelley finished the game against Central Connecticut with 444 total yards in the air with four touchdowns and one interception. The 2020 Walter Payton Award Winner will go into Southland Conference play with 1,202 total passing yards with 10 touchdowns and a 74.44% completion percentage.

The Lions will look to knock off McNeese for the second straight season in their first Southland game. The Cowboys of McNeese are coming off of a 31-24 victory against Southern University.

Another Southeastern sports team that suffered from the damage of Ida was the Lady Lions indoor volleyball team. The Southeastern Showdown was canceled due to the University Center sustaining damage.

Currently, the Lady Lions are sitting at 0-10 on the regular season. The Lady Lions’ most recent loss came from Idaho University in a 3-2 effort in the Jackrabbit Invitational.

The Lady Lions’ next match-up will be on Tuesday, Sept. 21 on the road against the University of Southern Mississippi. This will be the Lady Lions’ last non-conference matchup of the 2021 season.

Following Tuesday’s matchup against Southern Mississippi, the Lady Lions will open Southland play against Northwestern State University on Sept. 25. The Lady Lions’ first home matchup will be on Oct. 7 against McNeese State University at the Pennington Student Activity Center.

The Lady Lions soccer team will hit the road Friday, Sept. 24 to take on Texas A&M Corpus-Christi University. Following the matchup against TAMU-CC, the Lady Lions will wrap up their weekend road trip against the University of Incarnate Word on Sept. 26. Currently, the Lady Lions are sitting at a 2-5 overall record and 1-2 Southland Conference record.

The Lady Lions hope to turn things around as the team was projected to finish first in the 2021 pre-season polls.

The Lions golf team will kick off its 2021 Fall season this week in the Lone Star Invitational in San Antonio. This year’s golf squad will feature one underclassman and eight upperclassmen. Head Coach Jake Narro will be entering his seventh season at the helm and will hope to lead the Lions to a 2021 Southland Conference title. On Sept. 16, the Lions’ baseball team was struck with heartbreaking news as former baseball player and coach Kaleb Manuel passed away due to a lengthy battle with cancer. Manuel served on Head Coach Matt Riser‘s staff for four seasons as an assistant coach. From 2016-2018, he coordinated camps, instructed outfielders, served as first base coach, maintained the playing surface at Pat Kenelly Diamond at Alumni Field and assisted with administrative duties.