Calm after the storm: Southeastern students reflect on relocation to Monroe 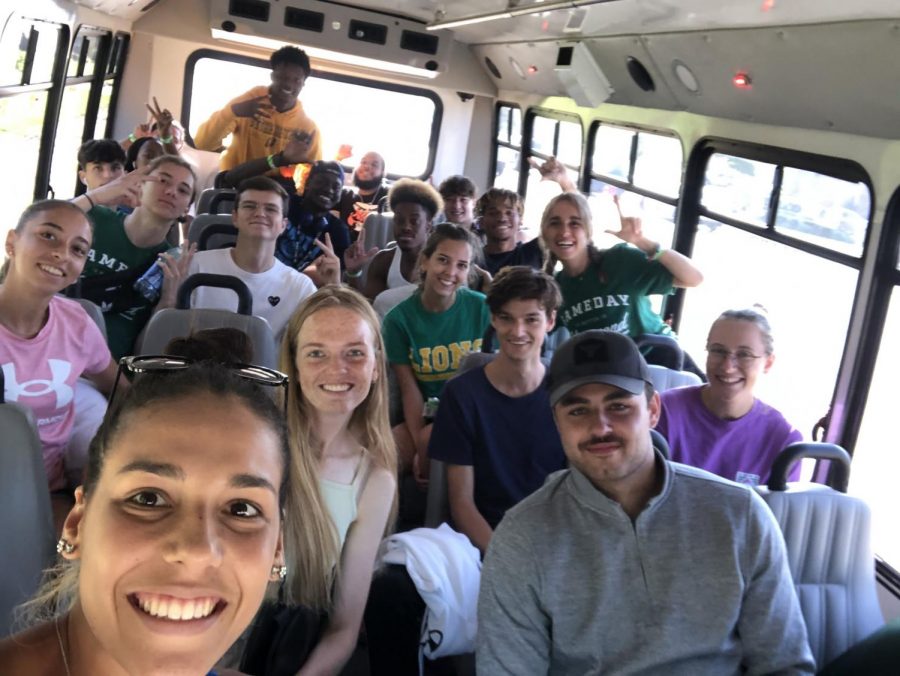 Southeastern students take a selfie on the way to the University of Louisiana at Monroe. Following Hurricane Ida, several residential students who remained on campus were relocated to ULM for shelter.

Days after Hurricane Ida blew through Hammond, students who took shelter on campus ventured to the University of Louisiana at Monroe.

The Lions arrived at the Warhawks’ campus over Labor Day weekend and stayed until Sept. 14. For many students, the unexpected getaway to Monroe represented the light at the end of a dark tunnel.

Natalie Krebs, a junior communication sciences and disorders major, embraced the experience with open arms, taking the opportunity to make memories with her friends.

“My friend group and I had a really good time. They have a river, and the students are allowed to take kayaks and paddleboards and swim, so we did that about four times. It was actually one of my friend’s birthdays while we were in Monroe, so we had a birthday party there, and we invited some ULM students.”

Although Krebs enjoyed her stay at ULM, she could not help but think about her loved ones back home.

“I was having so much fun, but at the same time, I was thinking ‘I need to check up on my friends and make sure they’re okay. My mom was sending pictures of our house, and a tree had fallen on it. It almost didn’t feel real. It was super different having that experience where people I knew were struggling,” Krebs said.

Krebs also thought of students with families much farther away. As someone who was raised in Brunei, Krebs said she was able to bond with the students who shared similar experiences.

“A lot of people who went to Monroe were the international students who were unable to evacuate elsewhere. I moved here from overseas, so I clicked with them really well,” Krebs said.

One of the international students to travel to Monroe was Katrine Olsen, a track and field athlete from Skive, Denmark.

As a first-year student, Olsen had only been in the United States for a matter of weeks before the storm struck Hammond.

“The most difficult part has without a doubt been the uncertainty of not knowing what to expect before, during, nor after the hurricane. I had only been in the states for two and a half weeks when the hurricane hit and had finally gotten used to everything. So, when the hurricane hit, it was hard to accept the fact that I didn’t have any control and didn’t know when things would get back to normal,” Olsen said.

After spending many nights in Hammond with no power, Olsen said she was thankful for the resources and hospitality at ULM.

“Overall, I had a very good experience going to ULM. We felt very welcome, and we were taken very good care of. In the beginning, it was weird being at a university other than Southeastern, but after a few days it started to feel very normal,” Olsen said.

Olsen was not alone, as many of her teammates are also international students who experienced a hurricane for the first time.

Robin Vreck, a freshman management major from Stuttgart, Germany, said he and his teammates grew closer from the adventure.

“I think we got even closer together in Monroe as a team because for everyone, it was new. I think that it is better to experience new things in a group/team than alone. We did it as a team, and I really liked that. Each of us have a different view to see things and the situation, but at the end of the day, we were all in the same boat and helped each other. We had a good time as a team in Monroe,” Vreck said.

She said, “We have been able to spend a lot of time together and have gotten to know each other in a very different way that we probably never would have if we didn’t get to share this very different and weird experience. I am extremely grateful that we have had each other to keep the mood high when everything seemed unmanageable. The fact that we have experienced and gotten through this together makes our connection much stronger.”