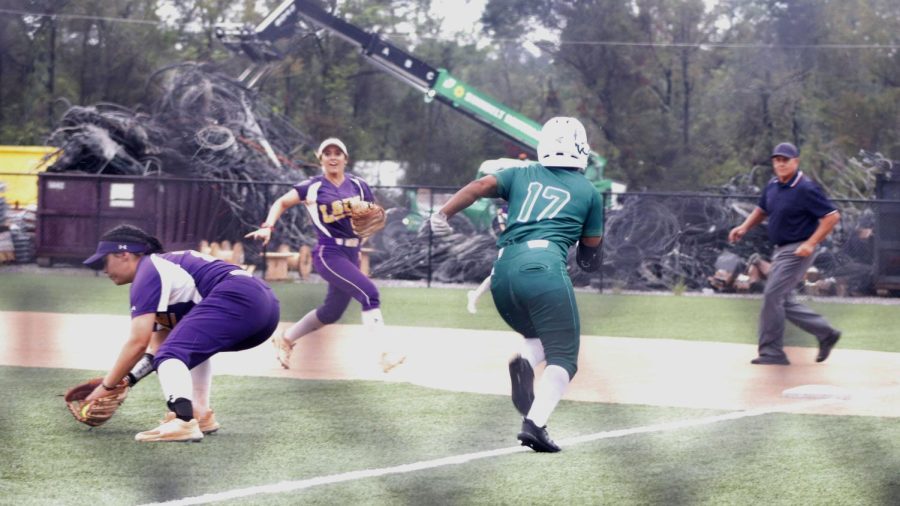 Senior outfielder Aeriyl Mass runs to first base as the LSU Eunice Bengals attempt to get an out. The Lady Lions finished the Sept. 29 exhibition game with a 18-7 victory.

Last night, the Lady Lions softball team squared off with LSU Eunice in a 10-inning game, defeating the Bengals 18-7.

The Hammond America Sportsplex will continue to serve as the venue for these fall exhibition games until North Oak Park is ready to go for the season starting in February.

In SLU’s second scrimmage of the season, the bats came out blazing as the scoreboard read 10-0 through two innings. Southeastern used the fast start to cruise to a comfortable 18-7 victory.

Head Coach Rick Fremin said, “It’s really important because we didn’t get last fall in. Covid wiped out the fall. The storm set us back. We lost a couple weeks of practice so it’s really tough. We’re going to do everything we can to get the games in regardless of the rain and all that stuff.”

Sophomore pitcher MC Comeaux got the start on the bump going three innings while allowing no runs on just a single hit and recording three strikeouts to go along with it. Junior pitcher Kaylan “KK” Ladner followed with another scoreless three innings of her own. She gave up one hit while dealing four strikeouts.

Freshman pitcher Alexis Findley closed out the game in the tenth, giving up one run on one hit and recording two strikeouts. The pitching staff as a whole dealt 16 strikeouts of the total 30 outs.

At the plate, the Lady Lions flexed their muscles by putting up an 18 spot on 21 hits. Ten of those runs came in the first two innings. Nearly all the Lady Lions got at least one hit.

Sophomore infielder Lexi Johnson and sophomore catcher Bailey Krolczyk led the way, each going 3-3. Johnson hit one homer and two singles, scoring two runs herself and knocking in another two. Krolczyk stroked a double and two singles with three RBI.

Madison Rayner, Audrey Greely, Madisen Blackford, Maddie Watson and Karlee Kraft all had two hits of their own. Greely went deep once and Blackford hit a pair of big flies.

Johnson hit a home run in each of the first two games of the season.

She said, “I just go up there and tell myself to get a quality at-bat and to be consistent. That’s been my goal and it’s worked so let’s hope it keeps working.”

One takeaway from the game was SLU’s strong start and finish to the ball game, but there is more to be desired according to Fremin.

He said, “I’m satisfied with us getting the game in. I’m not satisfied with us not putting a team away. We kind of sat on a 10 run lead there, cracked the door, let them back in. We’ve got to learn to finish. It’s great what we did at the end but there was a bit of a lull.”

Fremin was complimentary of the team managers saying their positive impact is felt in the program.

The Lady Lions take the field next on Friday, Oct. 1 against Meridian Community College at Hammond America Sportsplex. The first pitch is scheduled for 5 p.m.