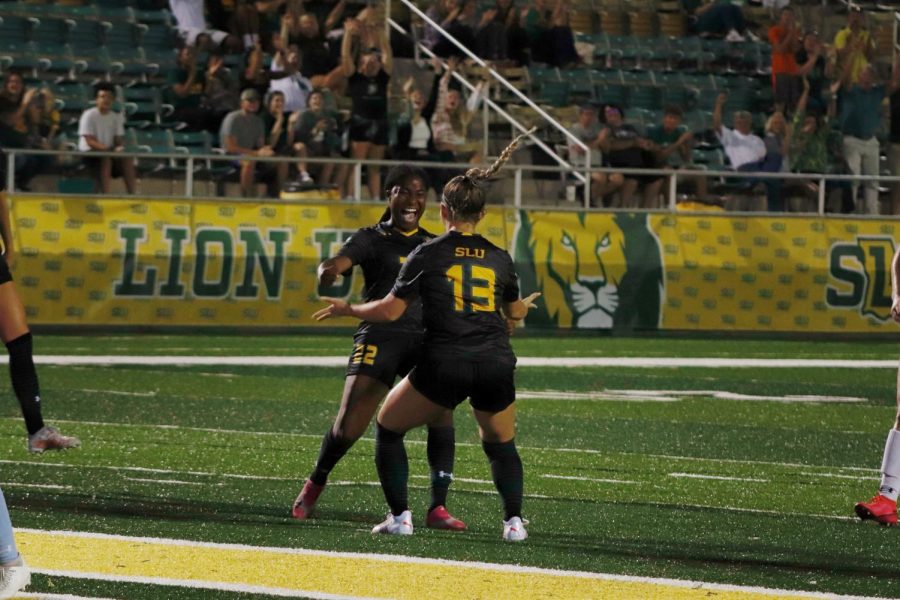 Maycie Massingill celebrates with Shamoy Campbell after scoring the first goal of her collegiate career.

On Oct. 8, Southeastern’s Lady Lions hosted the McNeese Cowboys for their first home game against a Southland conference member this semester.

The match went into double overtime, ending with a 1-1 tie between the two teams.

Freshman Macey Massingill made the first goal of her collegiate career in the first half of the match. The goal elevated the Lions to a 1-0 lead ahead of the Cowboys.

This was Massingill’s first goal of the 2021 season, making it a large accomplishment for her as she had attempted 19 shots earlier in this season.

Christopher McBride, head coach of the Lady Lions soccer team, shared that he was overall very pleased with how the team played this match. “The team made a lot of chance plays, which is difficult against McNeese since they are currently #1,” he said, “They have some dangerous players on their team, but we did a good job and I’m proud of them.”

McBride also stated that the team needs to be more composed and make more chance plays, as well as stay focused all the way through to the end of the match if they wish to succeed more.

The Lion’s next game is against Houston Baptist at Strawberry Stadium. The game begins at 1 p.m. on Oct. 17 and will be streamed on ESPN+.