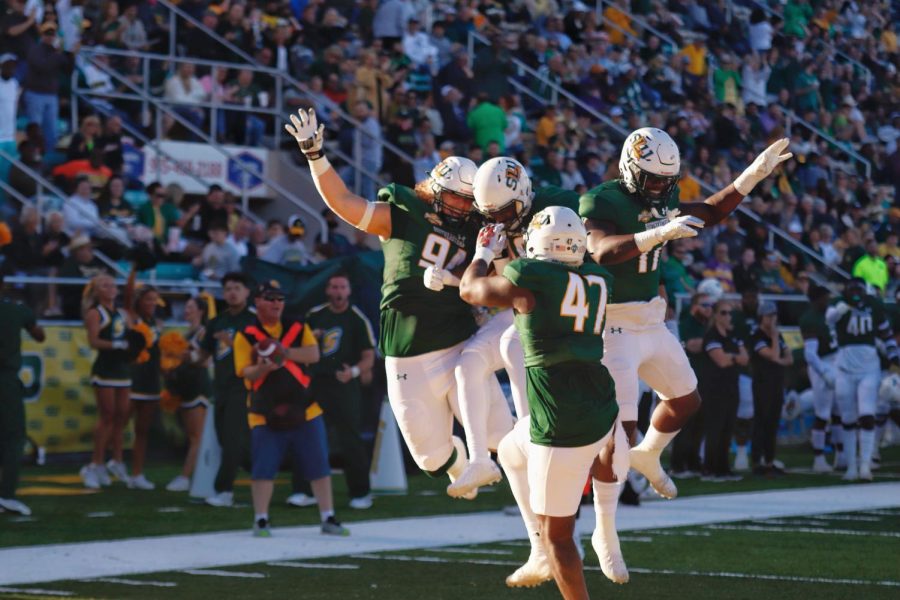 Star quarterback Cole Kelley continued his season for the Lions throwing for 396 yards and five scores on the day as Southeastern roared to a 61-24 victory over Houston Baptist on Homecoming.

The sold-out student section at Strawberry Stadium gave the team a lift in their first home game of the season. The crowd’s energy was present throughout the game as SLU pulled away with it in the second half.

61 points set a watermark for Southeastern’s season up to this point. Despite already owning the second highest scoring offense in the FCS, this unit seems to get better week by week.

“If you can’t come watch one of our games and enjoy it, there’s something wrong with you. You’re not a college football fan. You’re probably not a football fan. You might not even be alive,” said Head Coach Frank Scelfo.

Contrary to the final score, the first 27:55 of the first half was a hard-fought battle.

CJ Turner opened up the scoring on the Lions first drive of the game from a 15-yard touchdown pass from Cole Kelley after the defense had forced a Sam Houston punt on the opening possession.

A gutsy fake punt call from midfield set up the Huskies inside the SLU 15-yard line, and they would go on to score via Quarterback Orion Olivas’s four-yard touchdown toss on third and goal tying the game at seven.

Southeastern would answer quickly with another Cole Kelley TD pass this time to Nick Kovacs from nine yards out to go back up 13-7 (the PAT was blocked).

Houston Baptist responded with a 59-yard field goal on the leg of kicker Gino Garcia, which set his career long as well as a school record. This put the score at 13-10 after quarter one.

The Lions extended the lead early in the second quarter on running back Jahmon McClendon’s six-yard scamper. The Huskies were up for the challenge early responding yet again this time with an eight yard touchdown pass from Orion Olivas to Ismael Fuller cutting the lead to three.

With SLU clinging to a 20-17 lead late in the first half, Kelley engineered a nice drive which was foiled by a fumble in the red zone. However, on the ensuing play, HBU could not handle a bad snap and Southeastern’s Joshua Randall recovered the ball in the end zone for a touchdown.

Olivas committed a second turnover in as short a time by throwing an interception to defensive back Brandon Barbee setting up a Kelley to Austin Mitchell 35-yard scoring pass with just under a minute to go until halftime. 34-17 remained the score heading into the locker room.

The Lions carried this momentum the rest of the game as Cole Kelley and company proved to be too much for the Huskies to handle.

The Walter Payton recipient threw two more second-half touchdowns to Mitchell and Gage Larvadain. Cephus Jonson III added a touchdown run to go along with two Mateo Rengifo field goals to put the Lions at their 61 point total. Houston Baptist mustered one touchdown in the second half as Orion Olivas tossed a 51-yard score to Tyson Thompson.

It was too little too late as Southeastern cruised to a 61-24 victory on Homecoming night, improving to 5-1 on the season.

SLU will travel to Natchitoches to face off against in-state rival Northwestern State next Saturday, Oct. 23 at 3 p.m.