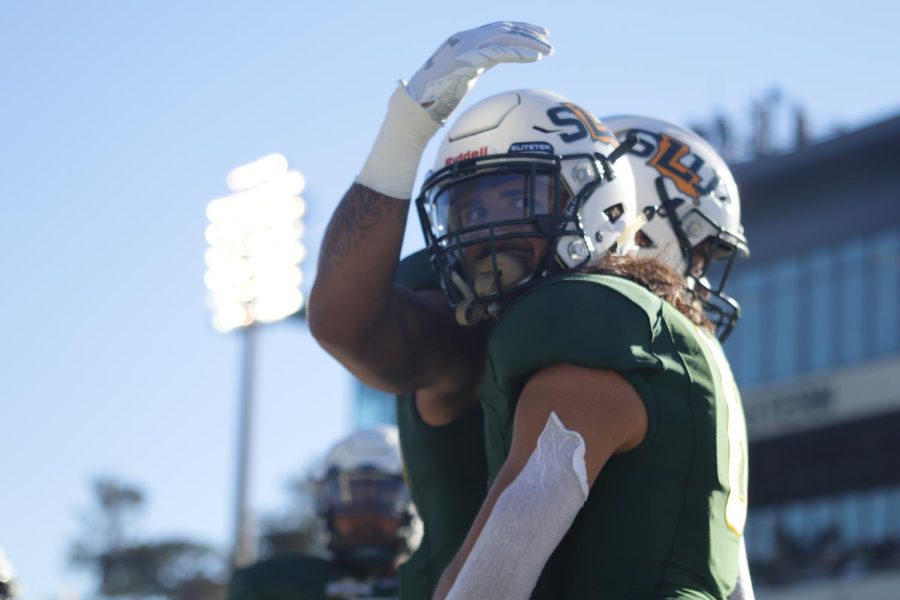 Southeastern sports continued on a hot roll last week with a 61-24 drumming of Houston Baptist University during the Homecoming game on Saturday.

Lions senior gunslinger Cole Kelley continued his impressive 2021 fall season with five passing touchdowns and 396 yards through the air on Saturday against the Huskies. The Lions had a grand total of 634 yards of total offense compared to Houston Baptist’s 295.

Kelley also got the job done in the run game as the 6’7″ Lafayette native had 51 rushing yards on 11 attempts, with his longest gain tallying 42 yards.

Receivers Austin Mitchell and CJ Turner were also Kelley’s top two targets again last week. The three-headed monster of Kelley, Mitchell and Turner have been terrorizing defenses all season as the trio combined for 134 receiving yards and three touchdowns on Saturday.

Up next for the Southeastern football squad is a road clash with in-state conference foe Northwestern State University on Saturday, Oct. 23 at 3 p.m. The Lions will look to knock off the Demons and improve to 6-1 on the season.

Southeastern’s women’s soccer team continues to struggle at home as the team’s home record fell to 0-2-1 on the season.

The Lady Lions’ next match will be at home against the University of Incarnate Word on Friday, Oct. 22.

Southeastern’s indoor volleyball squad picked up two wins over the week, knocking off the University of New Orleans and Nicholls State in conference play.

Both road matches were an easy win for the Lady Lions, as they knocked off Nicholls 3-1 and UNO 3-0.

In the 3-1 victory over Nicholls, Cicily Hidalgo collected 11 kills and four blocks for the Lady Lions while Crispen Adams added 10 kills and seven blocks. With a Southland Conference record of 5-2, Southeastern sits at a second-place tie with Houston Baptist University.

The next match for the Lady Lions will be an out-of-conference face-off with Jackson State University on Tuesday, Oct. 19 at 6 p.m.