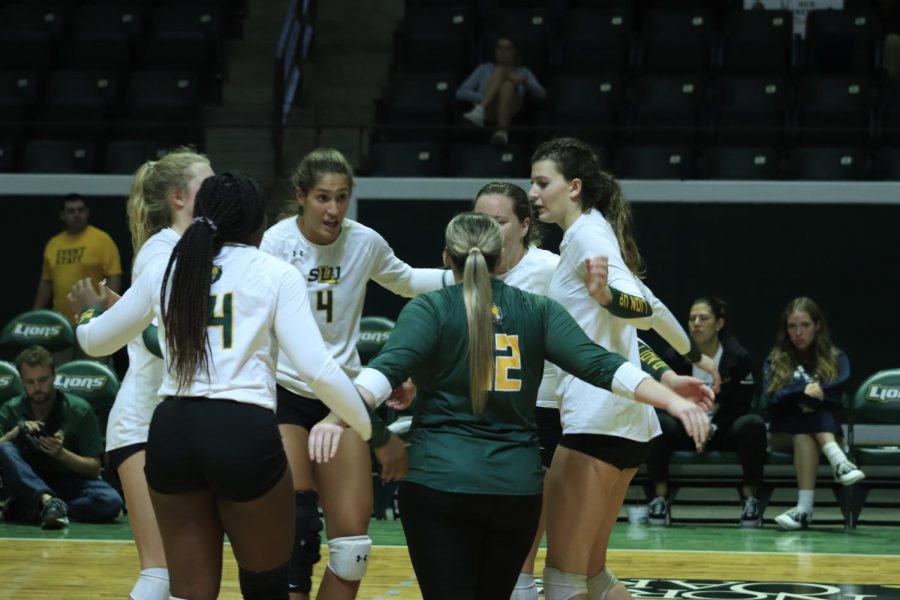 The Lady Lions huddle up during the Oct. 21 match against Nicholls State University.

Win, win, win and win is all the Lions football team has done this season after winning their fifth straight game, 51-14, this weekend over Southland foe Northwestern State University.

After entering the matchup undefeated in FCS play, the Lions had yet another explosive offensive game by dropping 51 points on the Demons. Senior quarterback Cole Kelley had his sixth straight 300+ yard game of the season. He also added three passing touchdowns along with 79 rushing yards on the evening.

For the third straight game, the Lions’ defense held their opponent to fewer points than the previous week. Southeastern’s secondary picked off Northwestern State quarterback Zachary Clement twice in the blowout victory.

Dual sport athlete Gage Larvadain also stepped up in place in the absence of receiver CJ Turner. The freshman wide receiver had three receptions for 104 yards and added one touchdown on the night. Larvadain also had an 88-yard touchdown reception in the fourth quarter.

Senior linebacker Alexis Ramos also had a game to remember. The Salinas, Calif. Native had six tackles and two pass break-ups on the night. Junior transfer Brandon Barbee led all Lions on Saturday with seven tackles and one tackle for loss in the 51-14 drumming of Northwestern State.

With the dub, the Lions improved to 6-1 on the regular season and 4-0 in Southland Conference play. Up next for Southeastern will be an at-home matchup against McNeese State University on Saturday at 6 p.m. The last time these two faced off, the Lions escaped with a 38-35 victory over the Cowboys.

The Lady Lions soccer squad took the field twice over the past week. They tied one match and lost the other to the University of the Incarnate Word and Texas A&M-Corpus Christi.

On Friday, the Lady Lions faced off against UIW and ended with a 1-1 tie, Southeastern’s third of the season. Mya Guillory had her fourth goal of the season as Makenzie Maher added another assist to her stat line.

Sunday afternoon’s matchup against the Islanders saw the Lady Lions’ offense shut down as they were held to zero goals for the sixth time this season.

Southeastern will wrap up their 2021 fall season at home against Nicholls State on Friday, Oct. 29.

The Lady Lions volleyball team went 2-1 in last week’s matches as they defeated Jackson State and the University of New Orleans but lost to Nicholls.

In Saturday’s 3-1 victory over UNO, the Lady Lions outscored the Privateers by 21 points.

The Lady Lions outscored its opponents by 26 runs last week. Up next for the Lady Lions will be a road test against Jones College on Friday, Oct. 29 in Ellisville, Miss.