From Colonels to Lions: Ford Pemberton hired to baseball staff 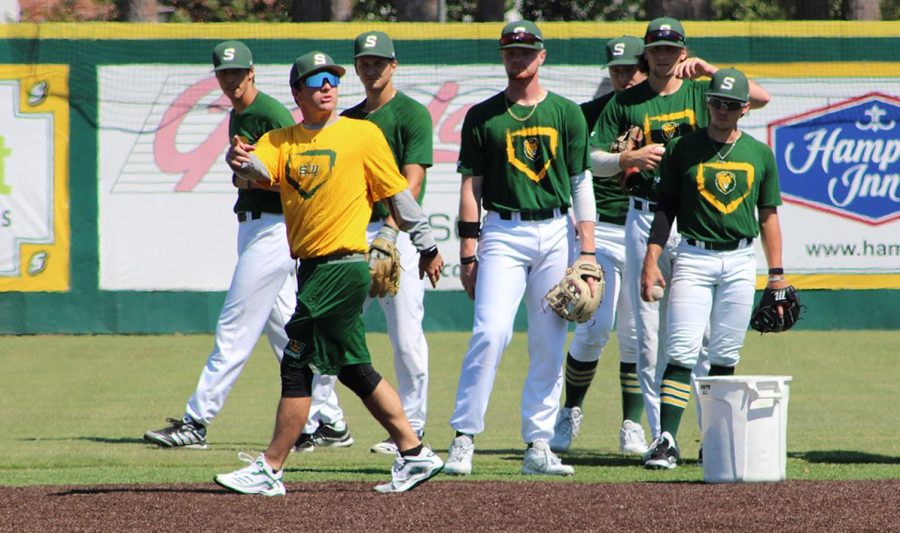 Ford Pemberton works with the baseball team during practice. Previously on the Nicholls State University baseball coaching staff, Pemberton joined the Lions in September as hitting coach and camp coordinator.

Pemberton will serve as Southeastern’s hitting coach and camp coordinator. The new man on staff is already eager to get to work.

“Obviously, this is a program of rich tradition, a winning history with a lot of good coaches and players who have come through here. I think we have a great coaching staff. Knowing Matt Riser over the years and going against him, it feels good to be in the same dugout,” Pemberton said.

At Nicholls, Pemberton started off as Director of Baseball Operations and Camp Coordinator in the summer of 2016. Ford was then promoted on staff a year later and then the following year he was promoted yet again, this time as hitting coach. He also coached base running, catchers and served as the program’s academic liaison.

This is a big gain for Southeastern baseball not just because of Pemberton’s experience but also because he comes from one of the Lions’ biggest rivals.

“The people are what makes a place and just knowing the coaches, knowing the staff through coaching against them it was an easy decision. A lot of good players. Great location in the state and overall, just a great university,” Pemberton noted.

Pemberton is a 2013 LSU graduate with a Bachelor of Science in Kinesiology. He also obtained a Master of Science in Sports Administration from Arkansas State in 2019.

The Bossier City-born coach was an assistant at Zachary, Parkview Baptist and C.E. Byrd High Schools, and all three won a state championship while he was there. He also served as an associate scout for the Arizona Diamondbacks adding to his resume.

Head baseball coach Matt Riser is more than happy to have Pemberton on his staff.

“To land a coach of that caliber with the experience he has in this league already. We were very fortunate. The good Lord works in mysterious ways sometimes. We were grateful for coach Donley’s time here, but we filled a huge void getting Coach Pemb to be able to come in and do what he needs to do with this offense and his infielders,” Riser said.

Work ethic, loyalty and energy were the first three words that came to mind from Riser when speaking of Pemberton.

Riser said, “He’s the first one to show up every day and the last one to leave. He epitomizes what we talk about as a team and that is maximizing our potential.”

Pemberton added that he is looking forward to going into battle with the team this season, saying, “I’m ready to go.”